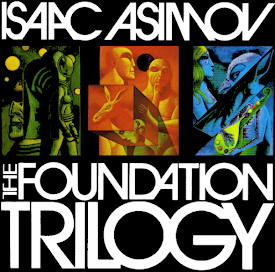 The Foundation Trilogy concists of: 1. Foundations 2. Foundation and Empire 3. Second Foundation The Foundation Trilogy is an epic science fiction series written over a span of forty-four years by Isaac Asimov. It consists of seven volumes that are closely linked to each other, although they can be read separately. The series is highly acclaimed, winning the one-time Hugo Award for "Best All-Time Series" in 1966. The premise of the series is that mathematician Hari Seldon spent his life developing a branch of mathematics known as psychohistory, a concept devised by Asimov and his editor John W. Campbell. Using the law of mass action, it can predict the future, but only on a large scale; it is error-prone for anything smaller than a planet or an empire. It works on the principle that the behavior of a mass of people is predictable if the quantity of this mass is very large (equal to the population of the galaxy). The larger the mass, the more predictable is the future. Using these techniques, Seldon foresees the fall of the Galactic Empire, which encompasses the entire Milky Way, and a dark age lasting thirty thousand years before a second great empire arises. To shorten the period of barbarism, he creates two Foundations, small, secluded havens of art, science, and other advanced knowledge, on opposite ends of the galaxy. The focus of the trilogy is on the Foundation of the planet Terminus. The people living there are working on an all-encompassing Encyclopedia, and are unaware of Seldon's real intentions (for if they were, the variables would become too uncontrolled). The Encyclopedia serves to preserve knowledge of the physical sciences after the collapse. The Foundation's location is chosen so that it acts as the focal point for the next empire in another thousand years (rather than the projected thirty thousand). Audio has 8 parts

excellent book, but choose another reader

Everyone who knows Asimov knows that the Foundation series is excellent; 5/5 stars. For those who haven't heard of it, trust the rest of the sci fi fan community and pick these books up (or listen to them). However, due to poor volume mixing, this radio interpretation is absolutely not recommended. I cringed in pain while riding the 2/3 train the very first time the weird synth sounds played at their explosive volume. The synth sounds are played at some dramatic moments and between all sub chapters, so they happen quite often. The radio interpretation is a very cool idea, even if it does leave out some descriptive narration (it is mostly dialogue), but this audio mixing is simply unbearable.

once you accepted the special effects, can enjoy dramatized novel better than plain pronunciation audiobook. Imagination is why we read instead of watching a movie adaptation of a long novel or saga. audiobooks can improve a text and good effort has been made. Author can write, director can put own version. You can always read a book and imagine/interpret what a character sounds like or feels, this version took a decision and gave a director's cut. feel free to come up with your own. Alleygator.

A product of its recording era

This would get more points of it weren't for the background noises. Unfortunately this was recorded around the era when the BBC science fiction community was in love with jarring, grating experimental synth. Were it not for that this reviewer would put it closer to 4-5 stars. some parts of the music being significantly louder than the dialogue I would recommend headphones if you don't want to annoy the neighbors and still want to hear what is being said. if you are of a nervous disposition and don't like sudden loud noises I would avoid it all together.

I really enjoyed this audiobook, the story is interesting and surprising at times, Asimov was certainly one of the Greatest Science Fiction writers, although he seem to have an easier time imagining a future with space flight and galaxy empires than a future where women have any importance in society. I had some problems with this audiobook excessive especial effects, though it gives it a certain old Dr. Who vibe, sometimes the sound effects are louder than the voices and I had to go back and listen a couple of times to understand what was being said.

As other reviewers have mentioned, the mixing is done very poorly. I did find that it was tolerable through ear buds, bit completely unlistenable on the car stereo. Others have wondered whether anyone could follow the story line in this format, stripped as it is of descriptive text and composed mainly of dialogue. I find the story great. I have never read the original, so I don't know what I was missing, but it was a great story, and I was always ready to listen to the next section. I found the one hour sections to be the perfect length to listen to during a long run.

A reading experience is different than a listening experience. If you are going to listen to a science fiction book then, there should be some flair to capture your attention and engage more of your senses. I thought this recording made a good attempt at that, in radio play format. However, most of the mixing is quite poor at times and the sound effects volume can blast blood from your ruptured eardrums, or soft voices lull you to sleep. It was somewhat reminiscent of the old BBC radio recordings of Hitchhiker's Guide to the Galaxy, where there were multiple voice actors and sound effects. Machiavellian schemes and the goodness in human nature are swirled together over generations in this series, with well-played voice acting and cool retro sci-fi sounds. I do wish it was re-mixed.

This sounds like a radio show from the 70s. The acting or voice work is very good. The radio show uses professional actors. However the sound effects of computers, space travel or really everything is Almost UNBEARABLE for me. The sound effects are very early buzzers and electronics high pitched whistles. Exetremely bothersome given they show up every minute or so. I would suggest that this audio play be ditched in favor of a play WITHOUT sound effects and straight reads.

cut the synthesizer players fingers off

story was fair to middling but very well made.. alrhough i listened too this on the road thefella with the synthesizer nlows your head off continuously throughout, more than a few times you would find me screaming at the speakers..hes just so loud..hes just so annoying..he just so needs a cast iron frying pan in the face