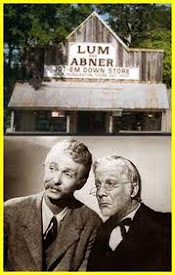 Clever and full of wit and charm, "Lum and Abner" is truly a classic. You can listen to a dozen episodes in a row and never tire of it. It's great entertainment. I remember a couple of years ago I listened to a slighty different version. After many, many years on the air, a decision was made (obviously by some "network executive) to revamp the show. Then came " The NEW Lum and Abner show." Complete with an excited announcer, band music leading up to the show's introduction, and full of extended fake applause and canned laughter after almost EVERY line. It was terrible! The archives need not post these episodes.

I've never cared for most situation comedies on television. However, Lum and Abner on radio is superior in every way I can think of to its nearest tv equivalents (Green Acres, Petticoat Junction), and there's no laugh track! Given the decades that have passed, the shows open a window into WWII, and how life and expectations proceeded in small town America. Many things are notable by their exclusion-people of color or minorities shown as little more than two dimensional throw-away characters. That said, the show has characters many of us can relate to.

I can't begin to tell you how much it means to me at age 63, with just a brief memory of when i used to listed to The Lone Ranger Radio programs laying on my parents bed at about the age of 4-5 years. To have the ability to access all the old radio programs and listed to them when i choose, it's just a great blessing. I want to thank those responsible for making this available to the public. Your rewards shouold be great! Glenn B. Reimel Berkeley Springs WV.

Just wanted to let all my friends out there on the interwebs know that this is one of the best comedy radio shows & was ahead of it's time! Yall do yerself a favor, give er a listen! It was awful thoughty of ye to recollect on my opinyun.

What a very enjoyable show this is, good acting, good humor, good sound effects, I just think the whole thing is good. Want some humor and enjoyment, listen to a few of the episodes, it will do your funny bone good.

That date given of 1/2/1933 has to be wrong because the episode references an incident that it states occurred in June 1933. Difficult to reference something in the future.

Listen to it on XM satalite in the vehicle and on my iPad at night while sleeping better than TV , thanks , Tom in Ky.

From the junk drawer

I expected to find sequential episodes, instead, this is just a jumble of shows tossed together, totally disorganized.