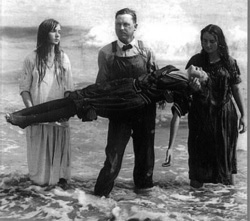 For Those who do not Know

I have read a few reviews about how awful this program was as it relates to sounds and pops on the show. You might not know this or maybe you do, but this program was produced through the facilities of the Armed Forces Radio Service Far East Network. This was the Armed Forces Radio station located in Tokyo Japan. I only recently found this out myself. So it was as if your local am radio station produced a radio drama series for airing possibly in syndication. Only large stations like WLS in Chicago or WJR in Detroit would attempt. But the Far East Network would produce these programs and they would air on their network, and then they would be transcribed and sent to AFRTS in Washington where they would be copied and sent out to all the other Armed Forces Networks around the world. Just thought you might find this interesting.

Title of Review: Daughter of Macabre story creator Review: I've come across this website in the past but didn't write anything as my Mom, Mary, and myself were surprised to see my Dads' (William Verdier) stories that he wrote in 1961 on a public domain. (His work was solely the property of Far East Network at the time) I was only 11 when Dad (Verdier) started writing these mystery stories that he appropriately called "MACABRE." We lived in Tokyo, Japan in the early 60s, and Dad was the Director of Far East Network from '61 to '64. He was asked to write these shows for FEN, and he narrated and starred in all of his 10 stories. He of course played the lead in each one. He also did the sound effects (I know the sound isn't coming across well presently, but back then it did) I was brought in to the studio to scream a few times (I screamed well), or say a line or two. Dad would write the stories at home and when it would air weekly on the radio at night around 9PM, our radio would be set at top volume, playing the "Macabre" theme, narration and story. Mom and I'd be so frightened listening to it so loudly as Dad liked the volume as loud as possible. Dad insisted we turn off the lights too. My friends at school, and even my teachers (who were nuns) would comment next day about how scary Dad made them feel as they'd listen to his show. (Radio shows were very popular in Tokyo then, and we'd also listen to shows like "I Love Lucy" and the like). As William Verdier's only daughter, I'd like to say that I'm so proud of him and am pleased that people are still listening to his mystery radio series. Yes, he only wrote 10 shows for Far East Network. Thank you all for your reviews of my Dad and his work. If you have any questions for me, I'd be glad to answer them here. -Christine Verdier Thompson-

This is one of the best horror series I have listened to. The first one, Final Resting Place, reminds me a helluva lot of some of those wacky pre-code horror comics of the 1950s. If you are at all claustrophobic it might actually drive you a bit mad. Even though the ending is a bit - well, odd, it doesn't matter, as the whole story is so well told. In all the episodes I've listened to so far the lead is taken by a guy with this deep fruity voice, It's as if some Colonel said to one of his soldiers, Hey fella. That's one hell of a fruity voice you've got there, and so the FEN decided to make a radio series with him as the star. The sound is 100%. Thanks for the upload; I recommend this series to everyone - it's scary!

This is another run of OTR ( Old Time Radio ). This collection contains 8 shows that feature creepy or mystery stories. THere's no real horror here, but some of them do get down right spooky. The show seems to have been produced for the U.S Armed Forces Radio and even stars some men in uniform, not as soldiers but as actors, and as sound engineers! It's an amusing collection of 30 minutes episodes. As you might expect there is some hiss, and the occassional scream might put your ear drums to flight. Over all I enjoyed these shows. Best listened to one per day, as all at once and they are likely to lose "the edge". Listen in a darkened room for best effect :) Read more of my reviews of the free audio found on the web at http://FreeAudioReview.blogspot.com/

I only needed to listen to the first episode to give up on this series. I'm amazed at all the positive reviews. "Final Resting Place" is one of the most illogical (what brand-new husband would rather be placed in a coffin for five days, than spend the first night of his honeymoon with his wife?) and poorly acted radio dramas I have ever heard. The rest if the storyline is equally ridiculous (how could the authorities still be "looking" for the madman, when he is so obviously on full public display at the carnival, for example?). To top it off, the actress playing the wife sounds like she's about twelve years old, with acting ability to match. Rock bottom entertainment.

I remember listening to these stories on Some a.m.(WoWo I think) station at night back in the early 70's with a small battery powered transistor radio a neighbor had toss out.I repaired the damage to it and would wait to hear the sound of that creaking door for the story to start.I hope you post more of them.I would like to hear the one about a mirror that had the Laughing faces.

I think this show is great alot of comments about William Verdier and his voice although kinda dry he is one of the creators and the main writer I wish there were more than 9 episodes made. the missing episode which had an air date of 12/25/62 was called "Of Frankensence and Myrth" it was holiday themed and from what I read it was pretty racey for the early 60's.

I have been searching for a normal audio speed version of this. I enjoyed the Midnight Horseman in years past, but I know it was not this sped up version. I agree with the other reviewer who said they gave up because of it. It is unfortunately not enjoyable at all. If there is any location that has the regular audio speed, I would love it!