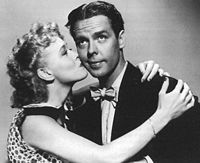 B&D Camping in the Back Yard

B&D Storm in a Teacup

Tried never to miss a show, but sorry to say there were a few. I would laugh so hard sometimes. Daisy, Sweet Pea, Alexander, Blondie, Mr. Dithers, and of course Dagwood. I always wanted one of his B I G sandwiches. I was surprised to learn, as I was talking with Ann Rutherford, that SHE had played Blondie on the radio for a while. She related how she had gone to meet with someone from the show, and they explained that she would have to bleach her hair, to which she responded, this is radio, not the movies, the other person responded, yes, but - you have an audience. She got it bleached.