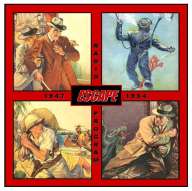 In the Golden Days of Radio, back in the 1930s to the 1950s, most popular radio series had a set time for going out each week. Occasionally, there might be a change in the schedule, but on the whole a consistent time-slot was something that helped build a large audience and so was something the big networks aimed to achieve. One exception to this rule was the dramatic adventure anthology series called Escape, whose time-slot shifted an incredible eighteen times in its seven-year run from 1947 through to 1954. To make matters even worse it had a habit of coming and going and sometimes disappearing off the schedules altogether at short notice for weeks on end only to resurface weeks later in a completely different timeslot. The quite flagrant disregard CBS paid to having a regular timeslot for Escape could make you think that it was just a run-of-the-mill series that was nothing but a lightweight filler for those times when the regular show was off-the-air, such as during the quiet summer months. In my opinion, and that of many old radio aficionados, this couldn't be further from the truth. Escape is probably the best adventure anthology ever broadcast. Escape brings together everything that was good about old-time radio drama rolled into one. The title itself almost sums up the very essence of what radio drama is all about. Each of the episodes was a micro drama carefully planned to capture the listeners attention for thirty minutes. Over two-hundred episodes were made and almost all of them are as good today as they were over half a century ago. For the first few years the series was on air the announcement at the start of the show varied almost every week, but by the 1950s it had settled down to be the now famous:

Tired of the everyday grind? Ever dream of a life of romantic adventure? Want to get away from it all? We offer you ... ESCAPE!

This may give the wrong impression as Escape was far more than a swashbuckling adventure yarn. It was a brilliantly scripted and superbly produced series that brought to listeners adaptations of classic works by famous writers as well as brand new work by unknown talent. Many of the stories were later reused by more high profile shows such as Suspense, but on the whole the Escape versions were of equal quality and sometimes more dramatically focused and atmospheric. When Radio Life wrote "These stories all possess many times the reality that most radio writing conveys", it hit the nail on the head. This is a quality show in every way. If you've never listened to this wonderful series it's well worth taking the time to listen to it. Whether you listen in the car on your daily commute, whilst doing the housework, relaxing in your favorite easy-chair, or snuggled up in bed - you really will be thrilled! This Article courtesy of www.educations4u.com. OTRR Certification Information: Series Name: Escape Certification Status: OTRR Certified Complete Certification Date: November 27, 2011 Certification Version: Version 1 Number of CDs: 11 From the Old Time Radio Researchers Group. See "Note" Section below for more information on the OTRR.

Out Of This World (Audition)

The Man Who Would Be King (Raymond Lawrence)

The Most Dangerous Game

The Fall of the House of Usher

Pollack and the Porroh Man

The Young Man with the Cream Tarts

The Country of the Blind

An Occurrence at Owl Creek Bridge

Leiningen vs the Ants (national broadcast)

A Tooth for Paul Revere

The Man Who Would Be King (Ben Wright)

The Man Who Would Be King (Ben Wright)

The Diamond as Big as the Ritz (William Conrad)

He Who Rides the Tiger

The General Died at Dawn

The Drums of the Fore and Aft (Ben Wright))

Leiningen Versus the Ants (Tudor Owen)

The Fortune of Vargas

The Sure Thing (William Conrad)

Flood on the Goodwins (Jack Edwards)

Plunder of the Sun

The Sure Thing (Anthony Ross)

The Sure Thing (Anthony Ross)

Two If by Sea

The Man Who Won the War

The Man Who Won the War

The Ambassador of Poker

The Man Who Stole the Bible (Ben Wright)

The Rim of Terror

Serenade for a Cobra

The Power of Hammer

This Side of Nowhere

A Passenger to Bali

A Bullet for Mr Smith

A Bullet for Mr Smith

The Man Who Stole the Bible (Sam Pierce)

The Price of the Head (William Conrad)

The Man Who Liked Dickens

A Matter of Conscience

A Matter of Conscience

Diary of a Madman

A Study in Wax

I Saw Myself Running

I Saw Myself Running

The Man with the Steel Teeth

Lili and the Colonel

The Vessel of Wrath

The Voyages of Sinbad

A Source of Irritation

The Man from Tomorrow

The Bird of Paradise

Flood on the Goodwins (Vic Perrin)

Night of the Guns

The Price of the Head (Hans Conreid)

The Heart of Kali (last show)

High quality show I keep coming back to

Seems to load when nothing else will play on my phone. Good thing it's one of my otr faves! THE FOURTH MAN by John Russell (sp): Three men are adrift in an open boat from a notorious atoll penal colony. conrad, Fitzgerald, Bierce, that ilk. Great stuff. Thank you wonderful librovox!

Immensely enjoyable. It is difficult to praise this series highly enough. I have listened to 30 episodes in the last 10 or so days.

Armchair explorers, do not miss!

Leiningen Versus the Ants: the most thrilling 29 minutes in radio!! The Young Man with the Cream Tarts, A Shipment of Mute Fate, the Fourth Man (yes, there were four, not three, doh!)---simply guaranteed to help you ... ESCAPE the four walls of today ...

Escape is the best radio drama I have ever heard.

THIS AND SUSPENSE ARE THE BEST OF OTR!!!

That is one unattractive, unsympathetic fictional character, that guy in this story. Then there's the story itself! What happened to all the people? A disease is hinted at ( or is it?, or WHAT?), with the dissociative out-take bit about some rats going extinct in a region of Java. So then, where are the bodies of the billions of human dead? The author keeps dancing around with words like "decay," but without specifying bodies, just "cities" and "streets." I try to stay aloft (disbelief in suspension) by pretending the disease killed everyone months ago by now, long enough for even bones to be scattered out of our timid sight, everyone eaten by the animals that didn't die. Or did the animals die, or are there just SOME animals left alive, the same way there are some humans left? Why doesn't one human survivor get around to asking what kept they alone unscathed by the disease so poorly hinted at in the newspapers? The pro-tag was supposedly alone for a month studying ECOLOGY. Just how long was he alone before the month spent studying ecology? One month swept the world with disease, burials at sea were rushed with cartoon speed, then the ones burying the bodies died too, and the animals gobbled them nearly overnight, so that when down from the forest with his snakebite came out pro-tag, what greeted him was pristine, orderly peoplelessness, which at first he didn't even notice. As the story moves, his snake bite continues to hurt, drowning-at-birth any hope that some weeks and even months have NOW passed to account for the fresh clean absence of people everywhere, gone without a trace. I can't pretend the remains of multiple millions of dead people have dried up and blown away over time, because the opening protagonist is still feeling pain from his snake bite. This story seems so infatuated with itself and it's determinidly "different" presentation of a same-old-story, so above having to explain anything to us, that there's just nothing in it for me. My annoyance verges on disgust when he slaps the man he found alive, drunk, in a car, hitting him HARD and roaring at him to "WAKE UP!!!," shouting, "What's your name!!! YOUR NAME!!" like some out-of-control cop who never should have been hired for such work. Geee how I wish I could enter the story by magic so Narcississy Egomanny Instant-Authaw'tay Guy could try waking ME up like that! And it fits so poorly, the way he treats that first human he finally sees, a man in a car drunk, not feeling happy excesses of same-species relief at finding each other, no common ordinary instinct ti help the man, stick with him, I mean, what would ANYONE do in this situation? They'ds do anything BUT what our incurious pro-tag slug did. I love the Escape radio drama adventure sci-fi suspense series, Great, maybe even BEST stories, best actors, I so enjoy Robert Conrad, and good volume with crystal clear sound (found only 1 exception). It's all fun, superior entertainment, even "Earth Abides", in spite of itself. I'm still listening to it. Still following it through its somersaults, trying to grasp it and tie it down so it might behave, think of the audience, and BE a STORY.

FIRST - MAY I SAY I will someday donate to keep your work going, right now, I'm having serious financial issues. Since I'm unable to work anymore, I'm willling to DONATE MY TIME, as I listen to classic radio every night, all night, and have for years. I'm a "pseudo expert" on the series "Suspense," for example, and am hearing these Escape episodes for the 2nd and 3rd time. So, I'll offer any help I can. NOW, on to ESCAPE. A great series, period. I especially enjoy the classic literature adaptations. I would suggest Escape to any 1st time listener, then Suspense next. Enough episodes exist to listen to a different one every night for over three years! Great audio quality, too. Not bad for 60+ years old!