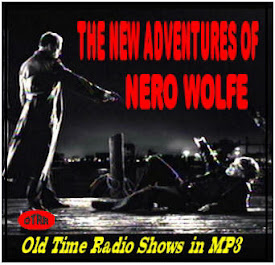 THE NEW ADVENTURES OF NERO WOLFE

Nero Wolfe first appeared on radio on July 5, 1943 on the NBC Blue Network in The Adventures Of Nero Wolfe. This series didn't last long and starred Santos Ortega as Wolfe and Luis Van Rooten as Archie. The second series was during 1945 on the Mutual network in The Amazing Nero Wolfe. This lasted only until December 15, 1946 and starred Francis X. Bushman and Elliot Lewis as Archie. The third series was known as The New Adventures of Nero Wolfe. Starting on October 20, 1950 it lasted only until April 27, 1951. It starred Sidney Greenstreet as Nero Wolfe. The part of Archie was played by Lawrence Dobkin for the first twelve shows. Gerald Mohr took over for the next four shows after making a guest appearance in the twelfth show. Harry Bartell was Archie for the remainder of the series. Nero Wolfe, also known as the galloping gourmet, was an armchair detective. He rarely left the house; instead his assistant, Archie Goodwin, would collect the facts and report back. Nero Wolfe would probably not have taken on many cases had he not needed the clients' money to pay for his two true passions: fine food and the collecting of orchids. Archie Goodwin, Wolfe's male secretary, prodded him into taking cases whenever the bank balance got a little low. Wolfe, as a character, is difficult to like. He's a self-assured type that does nothing unless he wants to, making his assistant, Archie Goodwin, deal with the outside world. The New Adventures of Nero Wolfe is based on a series of books begun in 1934 by Rex Stout. There were two previous incarnations of the radio series: The Adventures of Nero Wolfe which ran in 1943 and 1944 and The New Adventures of (aka The Amazing) Nero Wolfe which ran in 1945 to 1946. Very few episodes from these earlier series are in circulation today. There was also one later series created by the Canadian Broadcasting Company in 1982.

The Girl Who Cried Wolfe

A Slight Case Of Perjury

my fav so far. i sooo wish there were more of these.

These recordings are exciting and fun to listen to

These radio programs are just as much fun and clever, as any Sherlock Holmes fiction. I liked the characters that are in each episode & the little quirks of both Nero Wolfe & Archie Goodwin. You'll not be disappointed with the entire series.

I actually discovered Nero Wolfe through these radio programs. So far, I've read up to the 1952 Nero Wolfe books and I don't recognize any of the radio show mysteries in the books - which is OK by me. Listening to these again, they really did a good Job with the adaptation - Nero is a little more active here, but Archie, Fritz, Saul Panzer, Lt. Cramer, the ten thousand orcids, "pfui," the numerous bottles of beer...they're all here! I think Sidney Greenstreet does a fantastic job portraying Nero Wolfe - he's the voice I hear when I'm reading. Gerald Mohr is my favorite Archie Goodwin - he does the tough wise-guy so well.

Obviously, you can't make a half hour radio show that is even remotely comparable to what Rex Stout created in his novels and short stories. But, these are fun. I'd put the Canadian radio version - which were an hour - a step above this production. That being said, the only Nero Wolfe that does anything like justice to the written works is the A&E television version with Maury Chaykin as Wolfe, and Timothy Hutton as Archie. Among the best television series ever.