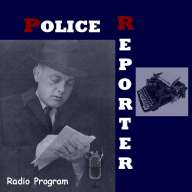 Based on true crime stories, "The Police Reporter" was a fifteen minute dramatic series syndicated by Radio Release Limited. The earliest listing found for it was in the December 10, 1933 issue of the "New York Times" where it showed up on WEAF's program grid on Friday, December 15, 1933 at 10:00 pm. There are also several listings in the "Los Angeles Times" in February and March 1936 for a fifteen minute "Police Reporter" program on KGPJ at 8:00 pm. The company that produced the series, Radio Release Limited is listed in the 1934 edition of "The Writer's Market", noting that they're "looking for anything with commercial value and will consider good scripts carefully. Pays good rates". The company is also listed in the 1935 edition of "Broadcasting: Yearbook-Marketbook Issue" on page 122. "The Police Reporter" is a quarter hour drama that might remind you a bit of "Front Page Drama" in its sensationalism and melodrama. What makes the series unique is that all the stories featured are true. "Gangbusters", the pioneering "true crime" series of the period, premiered in July 1935 on NBC as "G-Men" according to Wikipedia. So, "The Police Reporter" pre-dates the more famous network show by a couple of years - if not the first, it could be one of the earliest true crime shows on the air. Program 1 of the series is about a man who has been missing for four days. A neighbor calls the police, thinking something may be wrong. It's the Lincoln murder case, which occurred in Aurora, Illinois in 1923. The program includes an announcement that this is the first program of the series. The series uses real names, dates and locations, so it's easy to track down information on the real cases dramatized on many of the programs. There was a detailed May 13, 2007 newspaper article from the Aurora Beacon News about the murder. There are 26 shows in the distribution and they are digitized directly from a set of original transcription discs.

The Case Of Warren J Lincoln

The Case of The Vampire of Dusseldorf

The Case Of Gus Chapman aka The Georgia Slave Murders

Die with the Old Year

The Case Of The Mounties

The Case Of Jesse Ingram

The Case Of Abraham Becker

The Case Of Marie Stanovitch

The Case Of Major Murray

The Case Of Mrs. Daniel Bonzo

The Case Of Burt McDonald

The Case Of Ludwig Brandt aka A Case Of Insurance Fraud

The Murder Of Mitzi

The Case Of Texas Jim Baker

The Murder Of Tom Gorman

The Case Of Marie Boyer

The Burke and Hare Murders

The Case Of Michael Detenier

The Murder Of William Hartgill

The Murder of John Nungesser

Per the summary. That makes it important to me so gave them a listen and they deserve to be more than a footnote. You may listen and think they are using clichés of writing and acting, but they are more likely to be the SOURCE of the clichés. A different deal entirely! You'll know them instantly, down to the way the actors spoke them. Just listen starting at 3 min in on the Vampire of Dusseldorf for 'calling all cars' to 'extra, extra, read all about it!' not too long after. Hilarious example too, because chips would never really say what these radio chips say over the radio: describing wounds, giving crime scene address etc. Car 54 where are you? So much so that anyone looking for examples of old radio that are the most archetypal possible of clichéd radio crime drama, here it is for your inspiration and listening pleasure! Thanks for making them available librovox radio heads!

I had no problems with audio or downloads. The quality is the sound is perfect. The show is fascinating. Don't worry about the acting as the content of the show is the subject and interesting on its own. Not just U.S. location police stories are in here, some from France, Germany etc are included. What a wonderful upload, thank you Radio Researchers! I noticed that many radio programs would air certain words we can't say on radio even today. I am not elderly, but I sure wish we could go back in time back to this radio era. It's a thousand times better than what is offered in media today by far. Anyone would find these shows addictive.

Yes another gem found in the files of history. As stated earlier I also had no troubles with audio or downloads. The intro music is quite catchy. I like it. Wonderful series. Well worth your time. I have gotten through most as I like to mix them in with all the other series that I like to listen to, the episodes last longer that way. I have a list made up to keep up with all that I listen to and try to just cycle through them. Thanks Lum

I downloaded the ZIP file but I get a CRC check error on epidode #20. The whole time downloading the file seems wasted as that error prevents any of the files to be unzipped. This happens quite frequently on the "VBR ZIP" files.

If you like real crime you'll love this. They are ALL real crimes and really well done. You might find out things about the crimes you didn't know but would have probably heard about them. Give them a go!

I had no trouble with the zip download and I'm able to listen to all 26 episodes. The actress in the first episode sounds like Bernadine Flynn from the Vic and Sade program.

Never heard of it until this minute , will give it a go and report back later