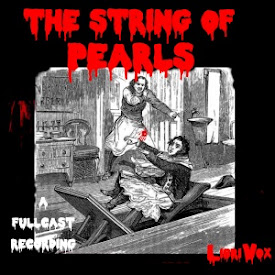 The String of Pearls (dramatic reading)

Todd is a barber who murders his customers and turns their remains into meat pies, sold at the pie shop of his partner in crime: Mrs. Lovett; Todd's barber shop is situated in Fleet Street, London, next to St. Dunstan's church, and is connected to Lovett's bakers shop in nearby Bell Yard by means of an underground passage. Todd dispatches his victims by pulling a lever while they are in his barber chair, which makes them fall backward down a revolving trapdoor, generally causing them to break their necks or skulls. In the event they are alive, he goes to the basement and "polishes them off" by slitting the victim's throat with his straight razor. Todd has a young assistant named Tobias Ragg. Summary by Wikipedia

Great story. Todd's love of vice got the better of him.

The more characters that are added to a story, the more diificult it becomes to control but whoever wrote this seemed to have that well managed. Great storyline, the plot was easy to follow & the variety of characters kept the excitement & interest going throughout. One downside was that this was a bit long winded. The ending was a little bit short...after 39 chapters & only about 10 minutes explaining all the pre-conceived ideas behind the mystery. 4 & 1/2 ☆. Btw I think I know who the author might be...another character in another story shares the same looks as Sweeney Todd...Ichabod Crane from Sleepyhollow by Washington Irving.

lol its me the weirdo

It was a really good book very entertaining but I don't read the description of it because then it ruins the whole thing Because you know what happens. Oh so it's very clear to hear The places where the narrator has re-done that spot it's like when you like say mistake and then you go back and cut it out and then start over again you can hear it. So I'm getting thing at 4 1/2 stars it is very well done

I give a 4.9 because I can't forgive having Charlotte Duckett in this. Her voice ranges between static reading and ending with an oddly high inflection that makes everything sound like a question? Otherwise top stuff, very good!

very different from the Sweeney Todd story we all know now, but really good!