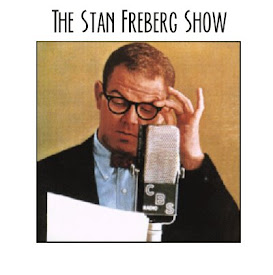 The Stan Freberg Show was a weekly radio comedy show that ran on the CBS Radio Network for only fifteen episodes in 1957–58. The show, starring comedian Stan Freberg and featuring the vocal talents of Daws Butler, June Foray, and Peter Leeds and the musical direction of Billy May, ran in the 7 p.m. timeslot previously occupied by The Jack Benny Program. The show was produced by Pete Barnum with sound effects by Bill James and Gene Twombly. Despite its short run, the show managed to develop some running gags and stock jokes, from Freberg's ambivalence toward Madison Avenue (faux advertisements for "Puffed Grass" and "Food", as well as the classic sketch "Gray Flannel Hatful of Teenage Werewolves") to the overwhelmingly popular interviews with a sneaker-wearing Abominable Snowman. By the thirteenth episode, it was clear that The Stan Freberg Show was suffering from a lack of advertiser interest (perhaps helped by Freberg's werewolf comparisons). CBS canceled the series after fifteen episodes; according to Joe Bevilacqua, it was the last American network radio show to devote itself purely to comedy.

This man and his remarkable ensemble of character actors are national treasures. Shame on CBS for not continuing to sponsor this programme.Imagine what Freberg and co.could have achieved given further airtime. It's a sad,sad example of commercialism at its blinkered worst. I'm English and as a child in Sheffield listened to American radio via AFN Frankfurt and the Voice Of America. They could only be received with any audability during certain parts of the day - usually at night - consequently my transistor radio was fixed to my ear under the bedclothes for hours listening intently as the reception would wax and wane. Consequently,I became very,very interested in America and Americana. An interest that has never been dissipated with time. This site is manna from heaven to me. I can listen to American bygone radio at my leasure - unfortunately for the rest, Stan Freberg has absorbed my time completely. None of these episodes have, in my opimion, lost anything with time. Considering their age I am amazed at their sophistication, their ironic edge,and cutting satire. Comparing their content with the sort of slapstick,knockabout comedy we were listening to here at the time, I can only presume that Freberg was ignored by commercial radio because he was intellectually way,way ahead of anyone else except perhaps stand-ups like Lenny Bruce and Mort Sahl. Every episode is a self-contained gem. Radio's loss was advertisings gain.

Freberg: the genius, the prophet

Before Weekend Update or The Daily Show, it was Stan Freberg who took to mass-market airwaves (on records as well as radio) to deliver the real headlines: Money can stifle free speech; corporation is just another way to spell corruption; patriotism can be hazardous to your health. These statements might sound mundane in jaded 2010, but they were fresh and subversive in the '50s when Stan made these shows. The antique pop culture milieu might obscure some of this humor, but in many ways, Stan's stuff was way ahead of its time. These shows require attentive, context-informed listening, but they reward the effort. Listen to "Elderly Man River" take on censorship or "Incident at Los Varoces" skewer corporate greed and global militarism and you'll start to understand why Freberg was an undercover revolutionary, sort of a Beat in a bow tie. He and other satirists set the stage for '60s dissent and '70s (and '80s, '90s, '00s . . .) cynicism. There are lots of resources about him on the Web, including videos of his rare TV work on YouTube. I commend them to your attention.

Thank you ever so much.

I wanted to thank the authors and editors of this site. Finding a downloadable site on Freberg's radio show was just short of a miracle for me. Bill, my best friend, passed away this last March (2008.) He used to play Freberg's radio shows for me; we shared some good times listening and laughing. Now with Bill gone, I couldn't find the Abominable Snowman in sneakers or Werewolves in Gray Flannel Suits anywhere in Bill's many recordings. I found your site with a web search. After downloading a few of Freberg's shows, those familiar words and skits flowed over my ears once again. I will admit, I spent the rest of the evening, crying and laughing while remembering Bill's and my friendship. Thank you SO MUCH for having this website and having this downloadable version. You have made one lady in Arizona happy beyond words. The highest rating has only five stars at most. Double that rating for me, please. God bless you all. Thank you, thank you, thank you.

Nostalgia and My Dad

Thanks for including these great episodes of the CBS Radio Stan Freberg Show! It brought back such memories from when I was 7 years old when my father was part of the show. My father, Bud Sewall, was the announcer on all the shows except the first two. He was the gentleman who both opened and signed off the show: "From Hollywood!!!, we present the Stan Freberg Show!...", then at the end of the episodes he signed off giving all the names of the stars and the very last thing he said was "Bud Sewall speaking." That was my father's voice. It practically brought tears hearing Dad again, as I said, for the first time in 40 years. He had passed away in 1978. Thanks, again for those wonderful memories! Martin Sewall

Stan's radio series lasted just 14 weeks; the reason was because he refused "participating sponsorship", insisting on ONE major sponsor- and turned down at least two tobacco companies who wanted to susutain him. CBS wasn't going to wait for "big ticket" sponsors to step forward (and nobody else seemed to want to sponsor the show, since it continually satirized the very advertisers Stan was trying to attract), and cancelled Freberg's series to make way for one with "participating sponsors": Henry Morgan's panel show "SEZ YOU", which continued through the 1957-'58 season. Incidentally, "THE STAN FREBERG SHOW" did NOT replace Jack Benny's program: it followed "THE BEST OF BENNY" at 7:30pm(et). Jack's transcribed repeats [1953-'55 vintage] continued until the spring of 1958.

I previewed this show from this site. The sound quality is a little dodgy but quite liveable. The show is great fun, and kind-of sophisticated, too. I admit I enjoy it more because I've had some history of reading about and listening to other OTR, so I think that helped a LOT. If you are new to OTR, this show is definitely worth keeping and saving for the day when you've got some names and circumstances under your belt and can get more of the jokes.

Not mad keen on this one. A little bit too smug for my liking. Could have boiled the whole thing down to an hour long show and it would have been quite amusing. As it is there's huge stretches of it that are pretty poor.

This is the best example of the early work of Stan Freberg and a collection of creative comic men and women who were successful voices for several Warner Brothers and Hannah Barbara cartoons who's voices shall live in history.