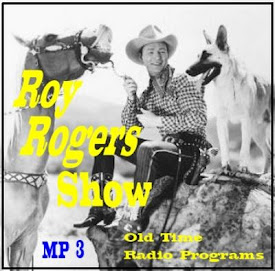 Roy Rogers, was a singer and cowboy actor. He and his wife Dale Evans, his golden palomino Trigger, and his German shepherd Bullet were featured in over one hundred movies and The Roy Rogers Show ran on radio for nine years before moving to television from 1951 through 1964.

The Roy Rogers Show, with Dale

Roy Rogers 480328 Aud The Case Of The Mysterious Puppet

Roy Rogers 521120 Trigger Has Been Stolen

ONE OF THE GOOD GUYS

Roy Rogers was one of the true GOOD GUYS of the film industry. I had the pleasure of meeting Roy and Dale several years before his death and can only say that I could not have been treated better. Mr.Rogers and his wife acted as if we were long lost friends. They never forgot who made them the stars that they were. There will never be quite quite as good of a guy as Roy again. The programs are the usual fare, but with Roy and Dale in them, they are well worth the listen

I first heard Roy Rogers on radio about 1949 when he was on Mutual (at 6 p.m.) for Quaker Oats. They had a jingle that went "nutrious, delicious, makes you ambitious." Since this was before pre-sweeted cereals, you had to beg your mother to put plenty of brown sugar on your QO to get it down. Roy had some great premiums (branding iron ring, etc.) but you had to send in the boxtop. And you couldn't do that until you had finished the box. Man, was I glad when he switched to Post Sugar Crisps.

I too remember the program and the quoted cereal jingle. Gene Autry was my favorite but the decency of Roy and Dale always impressed me. Glad to hear these again while they are still on-line.