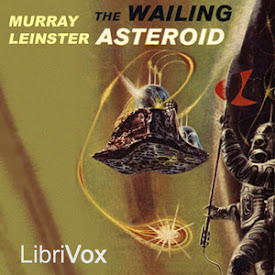 There was no life on the asteroid, but the miles of rock-hewn corridors through which the earth party wandered left no doubt about the purpose of the asteroid. It was a mighty fortress, stocked with weapons of destruction beyond man's power to understand. And yet there was no life here, nor had there been for untold centuries. What race had built this stronghold? What unimaginable power were they defending against? Why was it abandoned? There was no answer, all was dead. But—not quite all. For in a room above the tomb-like fortress a powerful transmitter beamed its birdlike, fluting sounds toward earth. Near it, on a huge star-map of the universe, with light-years measured by inches, ten tiny red sparks were moving, crawling inexorably toward the center. Moving, at many times the speed of light, with the acquired mass of suns ... moving, on a course that would pass through the solar system. The unknown aliens would not even see our sun explode from the force of their passing, would not even notice the tiny speck called Earth as it died.... - Summary by From original text (6 hr 11 min)

I found this title after a 50 year search for the movie based upon "The Wailing Asteroid" titled "The Terrornauts". It is a sci-fi mystery with undertones that echo the thoughts of the cold war and arms race contemporary to its publication. This book reminds me of the "Known Universe" tales of Larry Niven and the works of Andre Norton. There is no violence or adult situations that parents might find disturbing. There are political comments that go with how governments may react to a discovery of artifacts discovered well beyond the known limit of human travel. Only due to some technical and scientific discussions, I would imagine this book well suited for young adults as a minimum.

SPOILER Alert. 1. A strange cube, found with prehistoric people, would not be an item that would be given to a kid, or let go of as easily as one discards a snot rag. In fact, archeologists would niggardly cleave to it as the proverbial/actual white on rice; locking said cube under glass as the oddity of the century. So I find the lead character's explanation of how it came into his possession very dubious. 2. The ancient enemy, having previously encountered the spherical weapons would most likely anticipate them and the subsequent modification. A better and final end to the war would've been modifying the transportation pads to instantaneously transport the enemy to the periphery of their home world; thereby letting them taste their own medicine -- disheartening them & leaving only the personnel of their fleet to reconstitute their race (hopefully unlikely).

This is a crazy improbable sci-fi tale that was a joy to listen to. It's old school and if you have issues with nitty gritty science details not making sense you can pass on this one. However, the constant obstacles and puzzles faced in this story and the various shoestring methods employed to circumvent disaster make for an enjoyable story. The author throws around all sorts of creative ideas and theories which is why I enjoy sci-fi. This is just a fun and exciting story made all the better by the wonderful reading by Mark Nelson.

Fun read of a campy vintage sci-fi story with some futuristic vision and some definite old-time vibes. Feminists will hopefully be "amused" by the many 1950s stereotypes. It's possibly good for breaking those down because of its example of just how bad they were. Younger people may not be aware of just how bad it was in America at that time.

While the story and reader were excellent the added political advertisements were so irritating I almost quit listening. Greater care should be given to avoid redundant advertisements and if of a political nature should be balanced between viewpoints so that LibriVox is not representing a bias.

freedom loving Americans take space travel into their own hands

Everyone in "authority" gets eviscerated in this libertarian sci fi classic. I love how prominent the woman are, not because I care about that kind of equality BS, but because it is done in a realistic and effective way.

I put off listening to this story for a while because the description of it sounded boring, I'm glad I decided to give it a listen. It's much better then described. Mark Nelson does an excellent job as usual reading! Thanks.

'50s sci fi fun from the always-entertaining Murray Leinster, and another excellent Mark Nelson reading. I hope this marks the end of the recent Librivox science fiction drought.