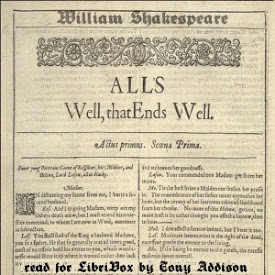 A fairy tale with real life consequences, All's Well That Ends Well concerns a pooe physician's daughter who goes to Paris to heal the King and asks of him a husband; not himself, but the Count Rousillon, in whose house her good father had lived. He weds her but does not bed her, flees to the wars where he is followed by his wife in a pilgrimage of which he is the object. How she uses his lust for a virtuous young woman to trick him into bedding her and giving her a child is but the real life drama to which, or so it would appear, a good woman is forced to commit herself to get herself a husband. When this blows up in the King's face he probably wishes he. or various of these young deceivers, he's not sure which, were dead. And they al live Happily Ever After.
In memory of my friends Henk and Rinie, for whom I read this piece. All's Well That Ends Well. In love and peace.
Summary by Tony Addison (3 hr 38 min)

Couldn't make it through

the readers pace was far too slow. I couldn't get into it.

Is the reader learning to read?