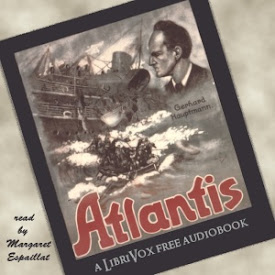 Frederick von Kammacher is a young doctor in Germany whose wife has gone insane, whose children are in a boarding school, and whose career has been destroyed by some faulty research he has done. He becomes infatuated with a teenage dancer, and on a whim he boards the the same steamship the dancer is on bound for New York. Hauptmann was heralded as a seer for his description of what happens to their steamship mid-ocean, and what in reality happened to the Titanic only months later. (Summary by Margaret) (13 hr 59 min)

The reader was fantastic. I will have to look up more of Margaret's recordings. Sound quality was great. The storyline itself was good, but the text is full of description of non-essentials and full of philosophical thoughts. Do we really need a minute description of every painting in a New York City pub, for example? I can understand some of the philosophy being in there, but there was a LOT of it. Things like these slowed down the story to a crawl; it could have been told in 1/3 less time and have been vastly improved (IMHO) by the editing. I understand how the description of the book talks of parallels to the Titanic - a ship from Southampton to NYC goes down in mid-ocean, few people survive, and those that do are mostly from the upper classes rather than the steerage passengers. But I don't herald the author as a seer; there were too many differences. The reason for the shipwreck was different; also, this ship wasn't considered unsinkable.

Reader consequently keeps her tube, her distinct pronunciation while representing the characters with individual and well positioned voices. Should I wish for anything would that be a single second pause after text end until "end of..." is announced.

Great reader, good translation as far as I can tell, but for me the book dragged. I ended up skipping parts or all of chapters and don't feel I missed much