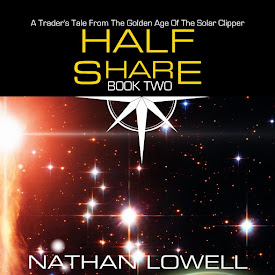 Join Ishmael, Brillo, Pip, and the rest of the crew of the Lois McKendrick as they help the newest member of the crew adjust to life in the Deep Dark.

Note: Some scenes in Half Share involve adult themes, nudity, sex and references to religions not based on Judeo-Christian traditions. Read at your own risk.

@Ethan - I actually wrote the books to be released as podiobooks. That's why I created them. I wanted to see if there was an audience for this kind of story. Turns out there is. In 2008 and 2009 I shopped the first books around a bit and found no ...

Can I gush anymore than I did in my last review? Seriously... listen to these books. They are beyond wonderful and Nathan Lowell stands alone in my opinion for his talent in bringing great writing to life. When he reads these wonderful tales, he IS Ishmael Wang. Mr. Lowell, your ...

Being a huge Science Fiction fan all my life, and having a special interest in anything "space" related, I found the first book "Quarter Share" not only intriguing, but captivating as well. I developed an instant interest to the characters, and fond myself relating to Ishmail on several levels. The ...

The last book was really good and exciting! This one...I dont know what happened, it turns into a teen boys sex fantasy and just keeps going. Very wish fulfillment fan fiction. I had been enjoying the almost mundane adventures of a guy who was clever, but not a genius. Not attractive, but not ugly. Not a dullard, just well spoken. But then its all about how he's the hottest piece in the galaxy and it just goes ON and ON about it! Would have been 2 stars, but respect to the first book keeps it at 3

Loving it in Borneo

My second listening to this series remains a great choice - I'm certainly loving how Ishmael is developing as a person and discovering a new confidence. There are some well developed characters in this book. The development of trade opportunities is also explored well. Nathan's narration remains impeccable and brings the characters to life. This book is a real treat. Don't pass up the opportunity to invest in this series

The first book in this series is more about trading and getting used to being a "Spacer". This book is should be titled The Sex Lives of Spacers. The reader is very good at making the feel of textures as delectable as the taste of a beautiful woman. Thus more so when talking of the latter. Ish is becoming more of the "Boy Toy" that his belt inlay foreshadowed. Excellent listen.

I love the story and appreciate that you've created an entire universe for your characters to explore. Strong and interesting, characters containing depth allowing interaction with each other and their environment. The characters flow smoothly through the story as they grow and learn to become more than they are/were. I've read the entire series and am reviewing them as a whole.