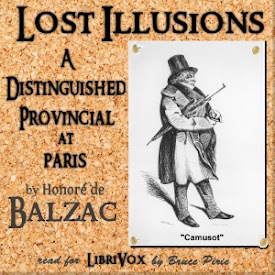 A Distinguished Provincial at Paris (Un grand homme de province à Paris, 1839) is the second book in Balzac’s Lost Illusions trilogy, which is part of his sweeping set of novels collectively titled La Comédie Humaine. The story is set in post-Napoleonic France, when the new bourgeoisie was jostling for position alongside the old aristocracy. In the first volume of the trilogy (Two Poets, 1837), we met Lucien Chardon, an aspiring poet who feels stymied by the pettiness of provincial life. In the present volume, Lucien, now using the more aristocratic-sounding surname "de Rubempré," leaves behind his family in order to seek fame and fortune in the literary world of Paris. He is tested by challenges that are literary, social, financial, and ethical.

Balzac’s work was hugely influential in the development of realism in fiction. The Lost Illusions trilogy is one of his greatest achievements, and is named in the reference work 1001 Books You Must Read Before You Die. The final volume in the trilogy is Ève and David (1843). - Summary by Bruce Pirie

The first book in the Lost Illusions three book series is phenomenal and this second does not disappoint. There are a lot of characters and I had to repeat a few chapters just to understand the role they played. It amazes me that the description of the print media holds true even today. It’s exciting to listen to the phenomenal work of Bruce Pirie and the love he obviously has for the genrè shines. Thank you LibriVox and especially Mr. Pirie. On to book three...

Concluding 2 of the 3 in this series, I'm impressed. The reader is amazing. The number of characters passing through these tales is overwhelming at times. The language and references to facts is over my head. Nevertheless, I found it enthralling. The main characters were interesting. I appreciate the focus on people and situations, rather than tedious descriptions of scenery. Will listen to the third book.

This is an amazing book. So true to life in many ways. Anxious to start the third book in the series. Highly recommended. As always the narrator, mr. Bruce Pirie is outstanding. Thank you, JK