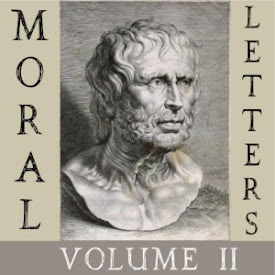 This is the second volume of the Letters, Epistles LXVI-XCII. Among the personalities of the early Roman Empire there are few who offer to the readers of to-day such dramatic interest as does Lucius Annaeus Seneca, the author of the Epistles. These letters, written by Seneca towards the end of his life, are all addressed to his friend Lucilius, who, at the time when these letters were written, was a procurator in Sicily. The form of this work, as Bacon says, is a collection of essays rather than of letters. Summary paraphrased from the Introduction in Volume 1 by Suprad. (8 hr 31 min)

Letter 66. On Various Aspects of Virtue

Letter 67. On Ill-Health and Endurance of Suffering

Letter 68. On Wisdom and Retirement

Letter 69. On Rest and Restlessness

Letter 70. On the Proper Time to Slip the Cable

Letter 71. On the Supreme Good

Letter 72. On Business as the Enemy of Philosophy

Letter 73. On Philosophers and Kings

Letter 74. On Virtue as a Refuge from Worldly Distractions

Letter 75. On the Diseases of the Soul

Letter 77. On Taking One’s Own Life

Letter 78. On the Healing Power of the Mind

Letter 79. On the Rewards of Scientific Discovery

Letter 82. On the Natural Fear of Death

Letter 85. On Some Vain Syllogisms

Letter 87. Some Arguments in Favour of the Simple Life

Letter 88. On Liberal and Vocational Studies

Letter 89. On the Parts of Philosophy

Letter 90. On the Part Played by Philosophy in the Progress of Man

Letter 91. On the Lesson to Be Drawn from the Burning of Lyons

Letter 92. On the Happy Life

Great book... Invaluable content... Unlike with other reviewers, I found this book pleasing to hear precisely due to the readers variance of tone, which provided an interesting level of clarity to informational bits within each sentence, as well as, ample time for understanding the bit's content. Sidenote: It is quite a paradox to see some reviewers commenting on the readers accent. Perhaps, instead of listening to Seneca they should be listening to Epicurus if the pleasure of hearing the right sound is more important than the burden of understanding the sounds meaning.

It is an amazing work and I found cute to be read by a girl with a sweet southasian accent.

I will read the book instead.

Accent is too strong, unable to be understood in English.

Speaker was fine and clear. Seneca was good too :)

The Greek writers were endorsers of heteronormative oppression and western chauvinism. Seneca is literally the name of a Native American first Nation. This old Greek white slave owner is culturally appropriating Native American names. In today's post 1-6 world, we do not care about the ideas of a bunch of old white males. We only care about structural oppression. Oppression is so systemic in today's culture that there is absolutely nothing that does not oppress. The poor BIPOCs and non-normative gender identities will always be oppressed and it is up to white people to dechlare our oppressive nature so we can create million dollar executive training seminars that combat white fragility. Some might try correcting me and saying it was a Roman not a Greek. Again that is Raycyst. Romans and Greeks are all the same in that they are all white and Raycyst

The reader tested my Stoicism beyond what I was capable. I couldn't finish. I was able to find an excellent reeding on YouTube.