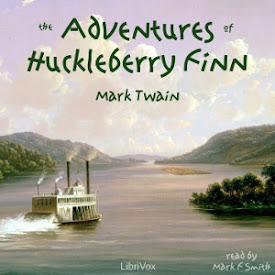 In The Adventures of Huckleberry Finn, Mark Twain creates an entertaining adventure of Middle America in the 1800's - afloat on a raft on the Mississippi River. Huck escapes his civilized life when he arranges his own "murder" and turns back into the backwoods, downriver yokel he started as, and in the process springing a slave, Jim, from bondage.

Huck and Jim experience life as a series of tableaux as the river sweeps them through small towns on their way South. At each stop, Huck engages his talent for mixing fact with bald-faced lies to endlessly get himself out of situations... and of course, putting him into others!

Much has been written about the statement Twain is making about slavery in this book, but it's really secondary to the story. The facts of how black people were treated in this period give Huck and Jim their license for life on the run. Modern listeners will be intrigued by the unencumbered life of the pair; they make do with coffee, fish from the river, and little else (but of course, when they do need something extra, they don't mind helping themselves to it without recourse to money!)

Huck and Jim have run-ins with desperadoes and family feuds and even manage to get run down by a steamboat. The adventures ratchet up when they are joined on the raft by a self-proclaimed "duke" and a "king" - shysters both, who spend their time in figuring how to fleece the public in the little river towns. And when Jim is captured and threatened with being sent back into slavery, Huck enlists his old buddy Tom Sawyer in a frenzied, desperate, and terribly funny rescue.

I had to clip a lot of laughing from this recording at Twain's sly, catch-'em-when-they're-not-looking humor, but you can feel free to enjoy some good belly laughs at this crew of lovable rapscallions! (Summary by Mark) (11 hr 33 min)

This is the best book I have ever heard. tom sawyer is my favorite too but not as much as this one. I have both of these books on hand but the language in Adventures of Huckleberry Finn I could hardly understand what Jim was saying without the audio book so I searched for it and Mark Smith does a great job reading this and one of my other favorites the sherlock Holmes books. I like seven out of those books and they are a study in scarlet the sign of four the hound of the baskervilles the copper beeches the speckled band the red headed league well its all of them.

This audio book has been the best I have ever had the pleasure of listening to. Every character has a voice and personality given to them by the reader. I'm glad that I was able to read The Adventures of Huckleberry Finn for the first time with the audio book. Thank you.

The reader of this book really brings it to life. There are a lot of different characters with different voices and he stays very consistent. The book is like a trip back in time. A simpler time when kids could still be kids.

That was the most awesome reading

That was the most awesome reading that I have ever had the chance to enjoy. Thank you so much for taking the time and so much effort, much more than Tom and Huck could ever have wished for.

The narrator is a talented and practiced storyteller who brings this story to life with many well done variations of southern accent and dialect. His consistency among the characters is impressive and I felt fully immersed in the experience.

This is The Great American Novel!! A story that explores the meaning of freedom and the development of conscience. The best part is how Mark Smith brings the characters to life. I love the accents!

Great, two Marks we're at it!

Mark Twain and Mark Smith take you on a river ride through the Southern states back in time. The great story and perfect reading just pull you along, thanks for letting me enjoy this! I would like to emphasize what a great job Mark Smith did in giving each character a distinct feel by voicing it in a different tone and dialect. While the book was written in a time slavery was a common and accepted practice, the book introduces some questions and the main character Huck Finn clearly struggles with the morals of slavery and racism.

The most strange but good book

honestly there where a few parts I isn't I I I understand but most of it I understood it was a really good book especially with this person who is reading it but hopefully when you read this or let your children listen to the audio book don't let them get any ideas in their heads ð.