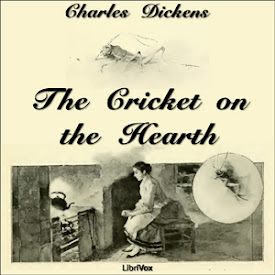 The Cricket on the Hearth

John Peerybingle, a carrier, lives with his wife Dot (who is much younger than he), their baby, their nanny Tilly Slowboy, and a mysterious lodger. A cricket constantly chirps on the hearth and acts as a guardian angel to the family, at one point assuming a human voice to warn John that his suspicions that Dot is having an affair with the lodger are wrong.
The life of the Peerybingles frequently intersects with that of Caleb Plummer, a poor toymaker employed by the miser Mr. Tackleton. Caleb has a blind daughter Bertha and a son Edward, who travelled to South America and seemingly never returned. Tackleton is now on the eve of marrying Edward's sweetheart, May.
In the end, the lodger is revealed to be none other than Edward. Tackleton's heart is melted by the Christmas season, like Ebeneezer Scrooge, and surrenders May to marry her true love. It is suggested ambiguously that Bertha regains her sight at the end. (Wikipedia) (3 hr 21 min)

The Peerybingle's have become an annual tradition in my wintery treks to work. My new friend Sage Turtle is a master story teller who makes the first part of this book come alive. Well done to all the narrators.

Close to the heart, much more so than a usual Dickens' book.

The Cricket on the Hearth