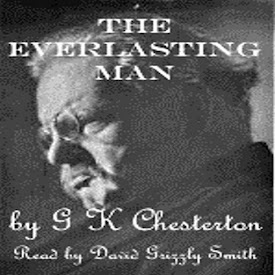 In this book, Gilbert Keith Chesterton contends that in the context of Evolution, the rise of Mankind is a surprise, not just a higher sort of Ape, because we try to understand the universe. And likewise, in the context of Mythology, Christianity is a surprise. The religions to which Christianity is compared have founders who at best are offered as prophets, holy men, wise men. But Christ is not presented as another Prophet. Christ is presented as Emmanuel -- God With Us.

Per G.K.C.: "There is more of the wisdom that is one with surprise in any simple person, full of the sensitiveness of simplicity, who should expect the grass to wither and the birds to drop dead out of the air, when a strolling carpenter's apprentice said calmly and almost carelessly, like one looking over his shoulder: 'Before Abraham was, I am.' ... It is the one great startling statement that man has made since he spoke his first articulate word, instead of barking like a dog. Its unique character can be used as an argument against it as well as for it. It would be easy to concentrate on it as a case of isolated insanity; but it makes nothing but dust and nonsense of comparative religion."

This is the only book I've recorded at the request of fans; I'd never been asked before. I recorded each hour-long chapter straight through, usually without having read the chapter before. Might have sounded a bit strained and tired at the end of some chapters, but I wanted each to sound like a cohesive whole. I hope I've done Mr Chesterton's work justice here. Let me know.

This book causes one to think in ways never thought possible about the nature of man and the history of humanity. Chesterton is always excellent, and this is no exception. The quality of the recording is great as well.

chesterton should be the intellectual of our times.

everyone should read this book!

Chesterton has no equal

delightful rendering of a timeless classic