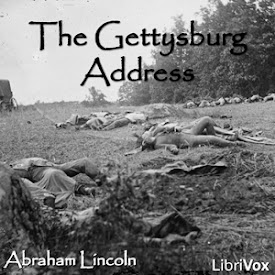 The Dedication of the National Cemetery at Gettysburg, in November, 1863, followed a few short months after the roiling, acrid clouds of gun smoke dissipated, leaving a little crossroads town in Pennsylvania heir to the human tragedy of over 7,000 corpses and 21,000 men suffering wounds. It was a most unnatural disaster.

On November 19, the chief executive made the trip to the still-dazed, shot-torn community to deliver, almost as an afterthought (for he was not the keynote speaker), an address that clarified his belief that the Negro race should be liberated from their slavery, and that despite the loss of so much blood and life, the Union should hold to the goal of completing this emancipation.

That he knew the eyes of the nation would rest of him was evident; this address was the first speech since his inauguration that he prepared in advance. But these carefully crafted words - only 269 of them - became a vital part of our nation's identity, and are a signature to the bedrock of our beliefs. (0 hr 2 min)

Didn't realise it was so very short. it's beautiful, though

Whenever I hear this beautiful address I feel the seriousness, I can see the watchful yearning eyes of his audience. Everytime I my ears are graced by these amazing words I wonder if anyone could ever amount to President Lincoln's greatness. His fortitude against the war that was clearly going to last longer than expected, his moral compass pointing him, in the end, towards abolishing slavery for good, and his incredible political expertise. Simply, this recording was well done and I thank you for the inclusion of this speech.

A clear, well enunciated version of The Gettysburg Address. An excellent reminder of an eighth grade memorization project.

Very moving. Thank you very much!