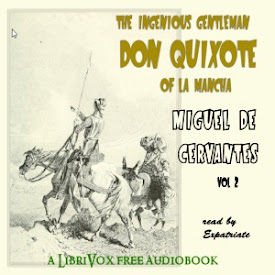 Don Quixote is a Spanish novel by Miguel de Cervantes Saavedra. Published in two volumes, in 1605 and 1615, Don Quixote is considered the most influential work of literature from the Spanish Golden Age and the entire Spanish literary canon. As a founding work of modern Western literature and one of the earliest canonical novels, it regularly appears high on lists of the greatest works of fiction ever published.... The story follows the adventures of a hidalgo named Mr. Alonso Quixano who reads so many chivalric romances that he loses his sanity and decides to set out to revive chivalry, undo wrongs, and bring justice to the world, under the name Don Quixote de la Mancha. He recruits a simple farmer, Sancho Panza, as his squire, who often employs a unique, earthy wit in dealing with Don Quixote's rhetorical orations on antiquated knighthood. Don Quixote, in the first part of the book, does not see the world for what it is and prefers to imagine that he is living out a knightly story. Throughout the novel, Cervantes uses such literary techniques as realism, metatheatre, and intertextuality. It had a major influence on the literary community, as evidenced by direct references in Alexandre Dumas' The Three Musketeers (1844), Mark Twain's Adventures of Huckleberry Finn (1884) and Edmond Rostand's Cyrano de Bergerac (1897), as well as the word "quixotic" and the epithet "Lothario." Arthur Schopenhauer cited Don Quixote as one of the four greatest novels ever written, along with Tristram Shandy, La Nouvelle Héloïse and Wilhelm Meister. - Summary by Wikipedia (19 hr 34 min)

I had no idea what it was going to be about but had just seen so many references that I had to read it. Lots of fun

An excellent reading of a hugely influential book. Very entertaining, despite it being a translation, which Don Quizote himself describes as 'looking at the back side of a tapestry- you can see the pattern but very little of the colour ir depth', and despite it being 350,000 words long if you count both books. A very even and clear reading throughout. Highly recommended.

A lttle recurring vibration from the microphone in Chapter 7 to 9. Otherwise a good volume and pitch.

The reading of the book was great, 5 stars. The content of the book is just too long and personally I wished for a little more action

good boom, I really enjoyed it. if I'm ever in Bangor Maine I'll but the reader a coke. the narration adds well as story we're excellent.

such a funny book, left my laughing while I ran. hard to see it end honestly. great narrator

Thank you for the well read rendition. Recommend for everyone.