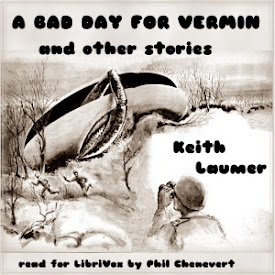 A Bad Day For Vermin by Keith Laumer

For your listening pleasure, here are three stories by the ingenious Keith Laumer from the glorious days of Science Fiction in the early 1960s: A Bad Day for Vermin, The King of the City and Doorstep. They were all published in various Science Fiction magazines then flourishing in the United States at that time. I won't spoil your fun of listening to them by giving detailed story outlines, but be assured that there are aliens of various disgusting and/or beautiful shapes involved in several and a sad view of our future life when the US government collapses. (phil chenevert ) (1 hr 36 min)

A Bad Day for Vermin

The King of the City, Part 1

The King of the City, Part 2

At the risk of reviewing the reviews, I feel compelled to state that the use of the words "nigger", "jew" and "imbecile" are perfectly acceptable in the context of the story. These are words that a trigger-happy redneck would use in such a situation, so their use in the story is as acceptable as their use in a review is. On a general note, I believe reviews should be limited to a brief summary of the item being g reviewed, rather than a vehicle for the reviewers opinion and "cleverness". Why try to put someone off something that's free for them to try anyway? This is a short story that you could say explores human attitudes towards non-human life and, as such, could have been intended as a commentary on the human fascination with killing other creatures for reasons other than personal survival. Listen and decide - don't pay any attention to reviews...

Thanks to both writer and reader. That last one did surprise me. :-)

A Good Days Listening for Me.

Fast paced & interesting for all 3 tales...especially the first, but it started sounding more like fiction with a little bit of the future thrown in. Anyway, great stories all round. Well narrated, as usual, by Mr Phil Chenevert...keep going & never stop!😊👍👌 Btw, a few words were said that need attention. In the first tale, Nigger & Jew at 8.04 & imbecile at 10.45. I realise that imbecile may not offend too many but a few groups might take offence to it due to the context.

These early stories by Keith Laumer are very slight, and do not hold up well. “Doorstep” is a fun, but heavy-handed, unfortunately probably realistic military overreaction to alien first contact, but the other two stories suffer from a lack of realistic responses to dramatic situations. OK if you’ve got nothing else to listen to.