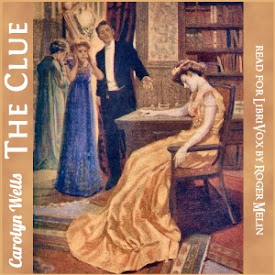 Once Carolyn Wells began, or re-invented her writing career, 'The Clue' was her initial book which strayed from children's writings into mysteries and detective stories. It is also when we are introduced to her most famous of detectives, Fleming Stone.

On the eve of her wedding day, Madeleine Van Norman, a beautiful young lady who is soon to come into her family fortune is found dead, apparently stabbed with an ominous blood-stained letter opener found nearby. There is nobody within the household who is not considered a suspect by the police, but how could a killer have slipped through the doors of Madeleine’s locked bedroom? It must have been suicide, as a note was found lying on a table near her body. Or was it? An intriguing mystery ensues which hinges on the discovery of a single, all-important clue. - Summary by Roger Melin (8 hr 1 min)

A Cry in the Night

A Case for the Coroner

'I Decline to Say'

An Interview With Cicely

The Truth About Miss Burt

A Talk With Miss Morton

The story unfolds in a leisurely manner as most of the older mystery novels did. While it is true that many of us presumably solved the mystery early on, the methodical unfolding of the tale is where the true enjoyment lies. Shame on those who cannot appreciate this craftsmanship. Shame also on those who did not enjoy Roger Melin. Some novels lend themselves to vocal differences for the characters; others do not. This one definitely does not, and Roger was superb!

A very boring book and the reader is good but also boring.. great book to fall asleep to

I liked this mystery story...wasn't thrilled with the ending, but it was well written and very well read!

Fantastic murder mystery. Well read and well worth a listen. I thoroughly enjoyed it.

An interesting plot development, thanks to all readers for presentations. Worth the read

great story - thank you for your precious time -