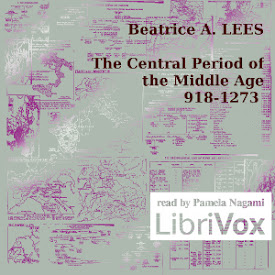 Beatrice Lees writes that the history of the period of the Middle Ages from 918 to 1273 is that of "a heroic period, the age of feudalism and monasticism, of chivalry and the Crusades." The era opened "with gloomy prospects for Western Christendom. On every side danger threatened" from the Vikings, the Saracens, and the Magyars. But better things lie in store in this little volume as the Capetian dynasty is founded in France, the Holy Roman Empire becomes the political center of Europe under Frederick Barbarossa, the Papacy attains its greatest influence under Innocent III, and Frederick II, called "stupor mundi," the wonder of the world, rules the cosmopolitan Kingdom of the Two Sicilies. - Summary by Pamela Nagami (8 hr 18 min)

Ch. 4: Cluny and Movements of Reform

Ch. 16: The Coming of the Friars and the Mediaeval Universities, Pt. 1

Ch. 16: The Coming of the Friars and the Mediaeval Universities, Pt. 2

Conclusion: Europe at the End of the Thirteenth Century

It is good to read someone who can assign some sense of order in this period of constant upheaval.