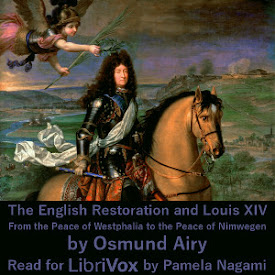 The English Restoration and Louis XIV: From the Peace of Westphalia to the Peac…

In this trim volume the British historian, Osmund Airy writes of the period between 1648 and 1679 when Cardinal Mazarin, having concluded the masterly Peace of Westphalia for France, confronts the rebellions of the nobility known as the Fronde. By the time of his death in 1661, Mazarin has completed the work of Richelieu and made Louis XIV an absolute monarch, ready to extend his borders by conquest. But in Holland, the young Stadtholder, William III of Orange, resolutely opposes Louis's military ambitions, while in England, the restored Charles II is struggling with Parliament, juggling religious factions, suppressing conspiracies real and imagined, and cheerfully spending Louis's secret subsidies, while giving the French king as little value for his money as possible. (Pamela Nagami) (9 hr 19 min)

Ch. 1: The Peace of Westphalia

Ch. 5: The Rebellion of Condé

Ch. 6: Close of the War with Spain

Ch. 7: Restoration of Monarchy in England

Ch. 8: Triumph of the Anglican Church--Relations with the Continent

Ch. 12: Diplomacy of Louis--Invasion of the Spanish Low Countries

Ch. 14: The Triple Alliance and the Peace of Aix-la-Chapelle

Ch. 15: Failure of the King's Attempt at Toleration

Ch. 16: Louis's Preparations for the Invasion of the United Provinces, Pt. 1

Ch. 16: Louis's Preparations for the Invasion of the United Provinces, Pt. 2

Ch. 18: The Dutch Republic before the War

Ch. 20: The Parliamentary Conflict in England

A rare look at just how pathetic England's Charles II was. Louis IV played Europe like a drum. Great read by Pamela. as always.

Interesting book about a small part of European history which is probably rather unknown outside of the Netherlands.