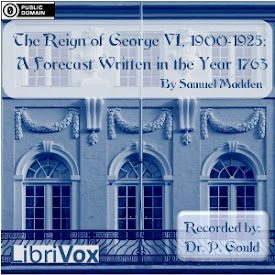 Imagine a world in which there were no major revolutionary upheavals (the American, French and Russian revolutions did not occur), there was no Victorian Age, the Great War (World War I) went unfought. No Cold War, no United States, no Soviet Union; in short, no world as we have known it. Such is the vision presented in this counterfactual historical work.
Originally written by Samuel Madden in 1763, the work is a prospective look at events in Europe from 1900-1925, the reign of Madden's "George VI." (The actual George VI, father of Elizabeth II, reigned from 1936-1952.) Taking the social, political, and economic trends of the eighteenth century and projecting their impact in the twentieth, this work is written in the style of a history of the first quarter of the twentieth century.
As editor Charles William Chadwick Oman notes in his preface to this 1899 reprint, "Of late years has it been common enough for authors to comment on the political and social tendencies of their own day, by drawing fancy pictures of the state of the world many generations hence, when these tendencies have been worked out to their full development" (p. vii). Chadwick was unaware of the identity of the author of the work, ironically leading him in his preface to make some speculations about the author which were similarly flawed. The comparison between this fictional alternative view of history--what could have happened--what didn't--and what actually happened is occasionally amusing, sometimes frightening, and other times eerily familiar. (Summary by DrPGould) (3 hr 31 min)

Parahistory is often interesting. Dystopian novels are often gripping and thoughtful. Forecast history is normally sophomoric. This one was perhaps only freshmanic. Good reader, though.