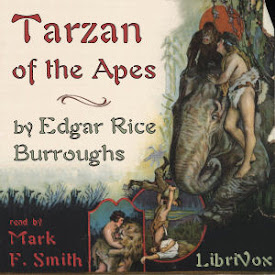 Tarzan of the Apes

Tarzan of the Apes is Burroughs’ exciting, if improbable, story of an English lord, left by the death of his stranded parents in the hands of a motherly African ape who raises him as her own. Although he is aware that he is different from the apes of his tribe, who are neither white nor hairless, he nevertheless regards them as his “people.” When older, larger, stronger apes decide that he an undesirable to be killed or expelled from the tribe, it is fortunate that Tarzan has learned the use of primitive weapons.

Although small and weak by ape standards, Tarzan is a human of god-like strength and agility to men who discover him. By studying these people, he gradually decides he is not an ape at all, but human.

And when he meets Jane, a beautiful American girl marooned with her father and friends on the hostile coast of Africa, Tarzan conceives love for her. When they are unexpectedly rescued before Tarzan can find a way to reveal his feelings to Jane, he determines to become civilized and follow her into the world of people – to find her and wed her, though he must cross continents and oceans, and compete with two other suitors for her hand.

This story was the subject of a successful film in 1932, with Tarzan being played by Johnny Weissmuller, who acted in a further eleven Tarzan films. According to Weissmuller in an interview with Mike Douglas, his famous ape-call was audio stitched together from a soprano, an alto, and a hog-caller! Summary by Mark F. Smith

Out of the Sea

The Light of Knowledge

At the Mercy of the Jungle

Call of the Primitive

The Village of Torture

The Outpost of the World

The Height of Civilization

Five stars for the reader! Somehow, having only known the Disney adaptation before, I wasn't aware of all the race issues in this story. But oh my. I was all prepared for swooning ladies and noble ape men learning to read and speak in two days, okay. Somehow I wasn't prepared for african tribes and how they are shown, the fact that Jane and Co. were NOT the first humans Tarzan has ever seen (he grew up among them!!) but simply the first white ones, so, you know, finally someone intelligent and civilized like him.... I don't want to go on its pointless. If you listen to it, treat it as window to the past and how an average person must have thought of race, civilization and eugenetics back then. It's chilling. On the other hand I'm willing to get through anything just for these jewels like Tarzan's love letter: "I am Tarzan of the Apes. I want you. I am yours. You are mine. We live here together always in my house." Now who wouldn't swoon over that...?

updating my review a bit

hey folks, i think it might be valuable to others to know the specific kinds of "non-pc" elements present in this story so they can make informed decisions. i had no idea going in what kind of content was in this novel and i made the mistake of listening to it out loud at work during off hours. a coworker happened by during one unpleasant episode involving the "mammy" style character. it was very uncomfortable to say the least. and i was reminded of why it is so important to be congnizant of what we are putting out in the world. this novel has deeply embedded notions of white superiority and i would recommend you seriously consider whether or not it is appropriate to give to a child without a discussion of the damaging portrayals of black people. this novel is not "good for everyone" but it is very interesting and even educational in its way.

So pleased I decided to listen to this book...simply because it was read by Mark Smith...my favourite narrator. The book is so different from the movies and TV series I have previously viewed. Such a treat to listen to older English and to have such an insight into life growing up in the jungle with such binary choices made from a practical perspective to sustain life. Whilst there are clearly flaws in Tarzan's ability to learn the written English language yet not speak it...this can be overlooked in the whole of the book...a rip roaring yarn. Marvellous!!

No rainy Saturday afternoon tv movie of Tarzan ever came close to story line of the original book by ERB. Very well written and thought-out, down to the character and motives of the African wild life. Wouldn't a modern narrated movie adaptation be wonderful? A note of thanks to the reader as well, who did a very fine job. I will persue him further.

Nothing deep but a pretty enjoyable plot to follow. The characters suffered a bit from their predictable and rather shallow behaviors. Tarzan also must’ve been an utter genius to have deduced the meanings of words not relating to images ( like how on earth would he discover what “I” meant?) But all in all a good listen! The reader was also fantastic!!

it's a fun listen by a great narrator. in many ways it reads almost as a comic book with Tarzan's superhuman abilities being both fantastic and otherworldly. while it is definitely a product of another age, it retains a power to captivate the reader [or listener] and weave a tale both ridiculous and fun.

I've only known Tarzan from films so this great reading was an eye opener and a lot more realistic ( however improbable the story is!) A wonderful flight of fancy and escape into a different world. I loved it and although it 1AM am starting on the next book !!! ( just a chapter or 5!)

I didn't expect it to really be the same, but it was far different than I thought it would be. Still very, very good. The ending surprised me. And as always, Mark Smith, I wish you could read every book they offer on here. Reading was superb and story was very good.