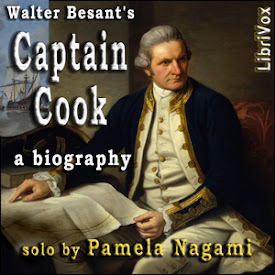 James Cook (1728-1779), British explorer, navigator, cartographer, and captain in the Royal Navy was the son of a farm laborer. Apprenticed to a grocer, he ran away to sea. He saw hard service in the Baltic as a merchant seaman, while applying himself to the study of mathematics, navigation, and astronomy. In 1755 he volunteered for the Royal Navy, working his way up to captain. This little biography by Walter Besant, chronicles Cook's three voyages of discovery and his violent death in Hawaii. Cook replaced vague mythology with accurate observations of people and places, animals and plants. Of his achievements Besant writes, "We seek St. Brendan's Island and Terra Australis Incognita; and we find New Zealand and Cape Horn, the Continent of Australia, and the great Pacific Ocean, studded with islands as the firmament is studded by the stars." (Pamela Nagami, M.D.), (6 hr 15 min)