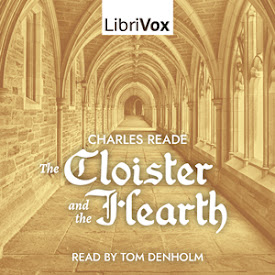 The Cloister and the Hearth

'The Cloister and the Hearth', by Charles Reade, was published in 1861. It's a long and winding picaresque novel set in 15th century Europe, telling the story of the love between Gerard Eliason, an artist turned priest, and Margaret Brandt, the daughter of a poor scholar, and reflects the conflict between family and church which overshadowed the lives of so many in medieval times. Its uniqueness lies in the way Reade, having meticulously researched his subject and the period, gives us insights more detailed than any other writer of fiction into medieval lifestyles and morals, combined with vivid descriptions of his characters – many based on real historical figures – and locations. He deliberately strays towards a medieval writing style, with many an archaic word to tantalise the reader or listener (an education in itself). Until well into the twentieth century, ‘The Cloister and the Hearth’ was considered one of the greatest novels in the English language. Its popularity may have faded, but those who have read it will tell you of the enduring power of Reade’s tour de force. A revival is long overdue, and is deserved: it’s an exceptional book. - Summary by Tom Denholm (36 hr 16 min)

Excellently written tale of adventure, faith, goodness & romance. The narration was perfect !! The voice of the reader was made for this story ! I cannot imagine it better read by anyone else !

Long but that's no criticism. Lots of historical detail and characters so drawn as to have me wondering about them when not centre stage. I regretted my lack of Latin and French; however, this didn't seriously mar the story. Fluent and expressively read. Many thanks.

Laughter, angst, tears, love, treachery and betrayal are hallmarks of every age. This charming and exciting book is beyond a gem. Well read and content quite appealing.