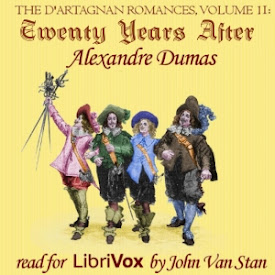 Volume 2 of The d'Artagnan Romances begins twenty years after "The Three Musketeers." Since then, d'Artagnan's career has stagnated, he’s lost touch with his friends, and the high favor earned with Queen Anne has been forgotten. His misfortune mirrors that of France, now ruled by an ineffective miser, Cardinal Mazarin, who’s avarice (among other vices) fuels a rebellion. Moreover, England is mired in civil war! Can d’Artagnan do the seemingly impossible: reunite “The Inseparables,” save the Queen and young Louis XIV from an uprising, and aid the English monarchy, all while avoiding the evil Mordaunt, son of a personal enemy long-believed to be neutralized? Well, according to d'Artagnan, "Great people only thank you for doing the impossible; what’s possible, they say, they can effect themselves." (jvanstan) (24 hr 10 min)

The Shade of Cardinal Richelieu

Anne of Austria at the Age of 46

The Gascon and the Italian

D'Artagnan in his 40th Year

Touches upon the Strange Effects a Half-pistole may have

D'Artagnan, Going to a Distance to Discover Aramis

Wealth does not Necessarily Produce Happiness

Porthos was Discontented with his Condition

The Castle of Bragelonne

Athos as a Diplomatist

Pates made by the Successor of Father Marteau are described

One of Marie Michon's Adventures

The timely Arrival of D'Artagnan in Paris

An Adventure on the High Road

The Ferry across the Oise

On the Eve of Battle

A Dinner in the Old Style

A Letter from Charles the First

How, sometimes, the Unhappy mistake Chance for Providence

Another Queen in Want of Help

Te Deum for the Victory of Lens

The Beggar of St. Eustache

The Riot becomes a Revolution

The Carriage of Monsieur le Coadjuteur

How D'Artagnan and Porthos earned by selling Straw

In which we hear Tidings of Aramis

D'Artagnan hits on a Plan

The Man in the Mask

End of the Port Wine Mystery

How Mousqueton had a Narrow Escape of being eaten

The 3 Lieutenants of the Generalissimo

The Battle of Charenton

The Road to Picardy

The Gratitude of Anne of Austria

The Oubliettes of Cardinal Mazarin

Thinking that Porthos will be at last a Baron, and D'Artagnan a Captain

Difficult for Kings to return to the Capitals of their Kingdoms

I didn’t think The Three Musketeers would get any better, but then it did. Plus, John van Stan is a phenomenal narrator who gives it his all for every character’s voice. Cannot recommend this audio book enough!

the boys are back in town

D'Artagnan gets the band back together for a reunion tour in the second part of the epic sextet. More political intrigue, more twists and turns and of course more running baddies through with a particularly sharp blade. We are treated to a single reader and John van Stan does a sterling job with different voices for the characters. I was initially irritated by the comedy Italian accent given to the cardinal, but on reflection this probably suited the character very well. A particular treat was that John has recruited his showbiz pal Clint Eastwood to provide the guest voice for Grimald. Made my day.

I don’t have all that much to say about the reading quality… Just that it is absolutely phenomenal! Great job by Mr. Van Stan to read this incredible story so well. I do have a query, however… Does anybody know if Mr. Van Stan will ever read Volume 3 Part 2? I haven’t been able to find a recording of that book on LibriVox. Anyhow, I would recommend this for ages 12+, it is not a story that caters to reluctant readers…

Second volumes are seldom equal to the first, but this one is. The first adventure was somewhat morecarefree, as befits the heroes as young men. This one, having added twenty years to their ages. is properly a bit deeper. Here we see the deep friendship which binds them, and we are immersed in their true love and respect for each other. Of course, the storyline is exciting, and the reader is as good as they come. ENJOY!!

such a great story and reading! the three musketeers was a good book but had lots of stale chapters. this story was not stop trials and tribulations and was hard to turn off. the reader did a great job, read very swiftly and his many voices really have it an extra flair. can't wait to start part 3!!!

Thanks for taking this on!

Exciting continuation of the three musketeers. Well read, this complex plot with many characters can still be followed without difficulty. Thanks, and looking forward to the next installment.

The plot was perhaps superior to the first volume, however I enjoyed the first more as it was more witty. Worth a read nonetheless, very enjoyable and great reader.

I loved the way the reader read Porthos" voice! I have it in my head now and it makes me smile.