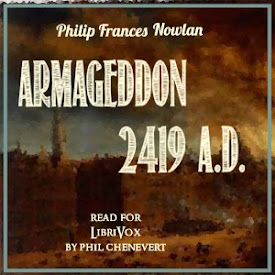 This is the original ‘Buck Rogers’ SF classic. Thrill to the adventures of Anthony "Buck" Rogers, one of the most celebrated characters in the history of science fiction. Famed in comic strips, television, in movies, and even radio, this is the first novel to introduce Buck Rogers to the reading public. In Armageddon – 2419 A.D., Buck, a victim of accidental suspended animation, awakens five hundred years later to discover America groaning under the tyranny of the villainous Han, ruling from the safety of their armored machine-cities. Falling in love with one of America's new warrior-women, Wilma Deering, Rogers soon become a central figure in using new-fangled scientific weapons – disintegrators, jumping belts, inertron, and paralysis rays – to revolt against the Han. 'Nuff said. Adventure awaits!!!!! (This book has no redeeming cultural value. Neither does its sequel, where the dastardly Han get what is coming to them, The Airlords of Han, which, incidentally, can be found in the LibriVox catalog at https://librivox.org/the-airlords-of-han-by-philip-francis-nowland/ ) ( wikipedia and philchenevert) (2 hr 57 min)