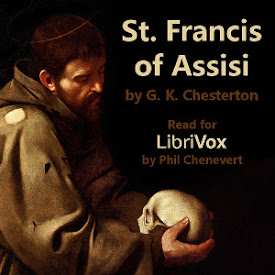 For Chesterton, Francis of Assisi is a great paradoxical figure, a man who loved women but vowed himself to chastity; an artist who loved the pleasures of the natural world as few have loved them, but vowed himself to the most austere poverty, stripping himself naked in the public square so all could see that he had renounced his worldly goods; a clown who stood on his head in order to see the world aright. Chesterton gives us Francis in his world-the riotously colorful world of the High Middle Ages, a world with more pageantry and romance than we have seen before or since. Here is the Francis who tried to end the Crusades by talking to the Saracens, and who interceded with the emperor on behalf of the birds. Here is the Francis who inspired a revolution in art that began with Giotto and a revolution in poetry that began with Dante. Here is the Francis who prayed and danced with pagan abandon, who talked to animals, who invented the creche. I read this book as a young man and not only did it introduce me to the amazing world of Chesterton, but it was a revelation of how an entire culture could be captured in a slim volume. (summary by Phil Chenevert, Wikipedia and various other PD sources) (4 hr 50 min)

The Problem of St. Francis

The World of St. Francis

The Mirror of Christ

The Testament of St. Francis

Interesting take on Francis of Assisi

Thanks to Phil Chenevert for this entertaining read! G.K.Chesterton's view of the Saint is quite refreshing and open-minded, yet the author often spends long paragraphs on purely rhetorical ramblings, which although very well written, distract from the actual analysis. All in all well worth listening to.

Religious History According to Chesterton

Chesterton consistently deals with subjects from one point of view, using the illustrations that fit that view. He admits this himself. His style doesn’t feel academic, but it isn’t trying to. His style is to illustrate things from his point of view. Keeping this in mind, his books are very enjoyable, and his point of view often striking.

Well read piece by a brilliant writer about a person whose love of Christ, humanity, and God's creation make me want to follow Christ and be kind to His creation, especially people, more than ever!

Some errors but competent throughout.