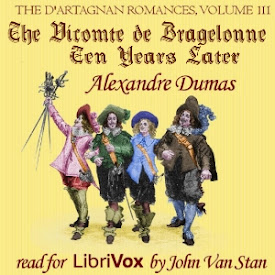 Volume 3 of The d'Artagnan Romances is divided into three parts. The first begins in 1660, ten years after Volume 2, with d’Artagnan as Lieutenant of the King’s Musketeers. In this post, he is very near to achieving his dream (becoming Captain) and even nearer to his King, being young Louis XIV’s personal guard. Seeing first-hand how powerless the child King was, d’Artagnan resigns his illustrious, but dull, post to turn his sharp wit and sword toward another ambitious aim: restoration of the English monarchy. To the joy of France, Cardinal Mazarin dies, leaving a power vacuum that pulls at the ill-fated ambitions of the rich and powerful, Nicolas Fouquet. To combat Fouquet’s ambitions and wrench the nation back from the brink of bankruptcy, young Louis XIV takes the Cardinal’s dying advice and leagues with the economic and sociopolitical reformist, Jean-Baptiste Colbert. Unfortunately, “The Inseparables” again find each other on different sides of the power struggle: Aramis and Porthos with Fouquet, but d’Artagnan and Athos with the King and Colbert. As d’Artagnan advises King Louis XIV, “The reign of Mazarin is over, but that of the financiers is begun. They have the money; your majesty will not often see much of it. To live under the paw of these hungry wolves is hard.” - Summary by jvanstan (31 hr 29 min)

What his Majesty King Louis XIV. was at the Age of Twenty-Two

The Arithmetic of M. de Mazarin

The King and the Lieutenant

In which Aramis is sought and only Bazin is found

In which D'Artagnan seeks Porthose and only finds Mousqueton

What D'Artagnan went to Paris for

Of the Society which was formed in the Rue des Lombards, at the Sign of the Pil…

D'Artagnan travels for the House of Planchet and Company

In which the Author, very unwillingly, is forced to write a Little History

The Shares of Planchet and Company rise again to Par

Of the Embarrassment of Riches

How D'Artagnan drew, as a Fairy would have done, a Country-seat from a Deal Box

An Affair of State

In which Mazarin becomes Prodigal

Confession of a Man of Wealth

How Anne of Austria gave one Piece of Advice to Louis XIV., and how M. Fouquet …

The First Appearance of Colbert

The First Day of the Royalty of Louis XIV

The Houses of M. Fouquet

A Quarter of an Hour's Delay

The Cabaret of the Image-de-Notre-Dame

How M. D'Eymeris' Diamond passed into the Hands of M. D'Artagnan

Of the Notable Difference D'Artagnan finds between M. the Intendant and M. the …

Philosophy of the Heart and Mind

How D'Artagnan became acquainted with a Poet, who had turned Printer for the sa…

In which the Reader, no doubt, will be as astonished as D'Artagnan was to meet …

Wherein the Ideas of D'Artagnan, at first strangely clouded, begin to clear up …

A Procession at Vannes

The Grandeur of the Bishop of Vannes

In which D'Artagnan makes all Speed, Porthos snores, and Aramis counsels

In which M. Fouquet acts

A Lover and his Mistress

The Courtyard of the Hotel Grammont

The Portrait of Madame

From Havre to Paris

An Account of what the Chevalier de Lorraine thought of Madame

A Surprise for Madame de Montalais

The Consent of Athos

Monsieur becomes jealous of the Duke of Buckingham

Sword-thrusts in the Water (concluded)

The Breakfast at M. de Baisemeaux's

The Second Floor of la Bertaudiere

I really like John Van Stan’s lovely reading, and have listened to his version of the d’Artagnan Romances. However, I cannot seem to find his reading of Louise de la Valliere, Part II of Volume III, if it exists here. Perhaps someone can lead me there.

ACTION TO THE END

great reading. As for the story the first half is full of action but then gets a little boring for 2nd half with tidbits of action and good storyline. I wish Vol 3 Part 2 was available 🤔😭. Looks like I have to jump to someone else for that but can come back for Part 3

wow. What a major league undertaking. John is one of the most incredible actor narrators on LibriVox thank you