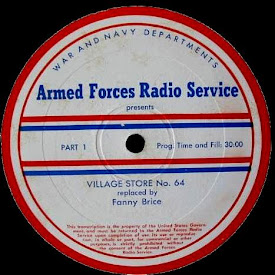 The biggest names in Hollywood and Broadway recorded for AFRS during the war years, The American Forces Network can trace its origins back to May 26, 1942, when the War Department established the Armed Forces Radio Service (AFRS). The U.S. Army began broadcasting from London during World War II, using equipment and studio facilities borrowed from the British Broadcasting Corporation (BBC). The first transmission to U.S. troops began at 5:45 p.m. on July 4, 1943 and included less than five hours of recorded shows, a BBC news and sports broadcast. That day, Corporal Syl Binkin became the first U.S. Military broadcaster heard over the air. The signal was sent from London via telephone lines to five regional transmitters to reach U.S. troops in the United Kingdom as they made preparations for the inevitable invasion of Nazi-occupied Europe. Fearing competition for civilian audiences the BBC initially tried to impose restrictions on AFN broadcasts within Britain (transmissions were only allowed from American Bases outside London and were limited to 50 watts of transmission power) and a minimum quota of British produced programming had to be carried. Nevertheless AFN programmes were widely enjoyed by the British civilian listeners who could receive them and once AFN operations transferred to continental Europe (shortly after D-Day) AFN were able to broadcast with little restriction with programmes available to civilian audiences across most of Europe (including Britain) after dark. As D-Day approached, the network joined with the BBC and the Canadian Broadcasting Corporation to develop programs especially for the Allied Expeditionary Forces. Mobile stations, complete with personnel, broadcasting equipment, and a record library were deployed to broadcast music and news to troops in the field. The mobile stations reported on front line activities and fed the news reports back to studio locations in London. “Transfer to mp3 for the following was performed by (“Ace”) on behalf of the California Historical Radio Society (www.californiahistoricalradio.com):” AFRS 047 - Swingtime AFRS 048 - Swingtime AFRS 064 - Village Store - Replaced By Fanny Brice AFRS 135 - Hymns from Home AFRS 136 - Hymns from Home AFRS 187 - Globe Theater - (This is My Best) Princess O’Hara

Good compilation - a little scratchy in parts - but fabulous to be able to listen to the “vibes” of yester - year:) Thanks!