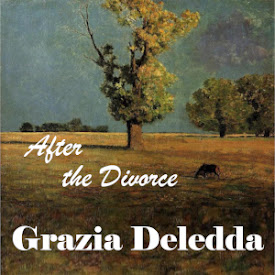 Giovanna and Costantino Ledda are a happily married couple living with their young child in a Sardinian country village close to their extended family. Costantino is wrongly convicted of murdering his wicked uncle and with no way of supporting herself, Giovanna reluctantly divorces him and is driven to marry Brontu Dejas, a wealthy but brutish drunkard who has always lusted after her.
As well as enduring a marriage amounting to slavery, Giovanna is derided by villagers for having two husbands. When Constantino is freed after the real murderer confesses to his crime, he and Giovanna are together again, but this time their relationship is outside the law, and sets both on a path of destruction, at the mercy of religious and social forces they cannot control.
The author, Grazia Deledda, won the Nobel Prize for Literature in 1926, for writings which show passion and sympathy for the people of her native Sardinia, and ‘After the Divorce’ (Dopo il Divorzio) is one of her finest works. - Summary by Tom Denholm (10 hr 11 min)