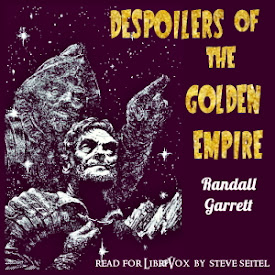 Despoilers of the Golden Empire

A handful of men, and an incredible adventure—a few super-men, led by a fanatic, seeking to conquer a new world! The story appears to be about an expedition through space to a planet inhabited by a civilized but technologically backward people, whom the expedition conquer. However, in the last line it is revealed to be anything but that. [T]he story reads like a pulp magazine yarn mixing space travel and classic swashbuckling themes, to the point where the characters even fight with swords, bringing to mind the adventures of Flash Gordon, or the Barsoom stories of Edgar Rice Burroughs. - Summary by Wikipedia, with excerpt from text (1 hr 42 min)

he didn’t fool me!

Well read, clever idea for a story. Can you figure out the author’s trick?

Creative telling of an interesting take on a sci-fi story!

I fell for it and loved it

Excellently read, the story rolls on with good pace and detail. I did guess the reality,largely helped by the illustration

I'm pretty sure I read this when it came out

but the hook got me again! Good job!