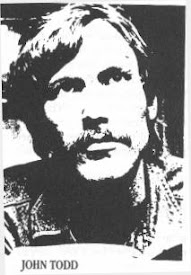 John Todd was later found to actually be an infiltrator and a nefarious influence on those Christians around him. You can tell that a lot of his stories are just that, stories. They are sprinkled with some truths like the fact that the pop music industry since early rock/jazz has been satanically inspired and directed, a totally judaeo-masonic witchcraft tool for dechrisitianization. All entertainment in general is that way.  It's certainly true that JRR Tolkien and his work is not Christian in the least and it's sad that they are touted as so to this day. And he does mention the Council of 13 and some of the details of the satanic organizational structure and confirms what we know, that organized satanism is heavily into the drug industry, the banking industry, god state, entertainment and other decadent industries. His real motive is to denigrate the Catholic religion and Mass as "witchcraft" which is nonsense, the mass has both Old and New Testament liturgy and support if you care to even research it. Most people are just full of bigotry, they refuse to challenge though, not knowing that almost all of the schismatic sects of protestantism and even mormonism have a version of the Eucharist within their services. God allows free will however and fallen man has only got worse over time especially with the almost total control of the judaeo-masonic mafia on  a worldwide level. Pride and perversion are the flood of these times. Summary of some of the tapes: In the fall of 1978, John Todd spoke at the Elkton Maryland Baptist Church. Tape 1A John Todd's testimony of deliverance from the Occult, evils of witchcraft. 6.1 megabytes in MP3 format with 43 minutes of audio. The sound quality will greatly improve after the first couple minutes. Tape 1B Music and Spells. 44 minutes / 4.3 megabytes. Tape 2A Dangers of fortune telling, familiar spirits, CS Lewis, JRR Toiken, etc etc! 43 minutes / 4.2 megabytes. Tape 2B Charles Manson, Sharon Tate murder, Process Church, epilepsy, UFOs, demon possession, Jimmy Carter etc! 40 minutes / 3.8 megabytes. Tape 3A What is the Illuminati? CFR? Trilateral Commission, what 33rd. Degree Masons believe about Lucifer, etc! 43 minutes / 4.2 megabytes. Tape 3B Continuation of what is the Illuminati? Who leads it? The Charismatic movement / Chuck Smith / Jesus Rock / John Birch Society / Freemasons, purpose of Rock Music, etc! 40 minutes / 4.4 megabytes. Tape 4A How to survive, etc! 43 minutes / 4.6 megabytes. Tape 4B Masons, Salvation message by pastor 1 hour 16 minutes / 9.1 megabytes. It is the largest of all the files of this set. The audio quality is not very good but still audible. Tape 5A Todd's testimony about the occult world, the Illuminati, the Collins family, introduction of witchcraft to America, etc! 41 minutes / 6.1 megabytes. Tape 5B Salvation testimony, deliverance from fear based on 2Tim1:7, Rock Music, Book of Mormon based on the Witchcraft bible Book of Shadows, witchcraft symbols used in jewelry, Catholic mass compared to witchcraft, why JFK was killed, etc! 39 minutes / 4.3 megabytes. Tape 6A History as a witch, doctrine, evils of television,43 minutes / 4.7 megabytes. Tape 6B More details of his life in the occult, evils and addiction of rock music, purpose of rock music - to get Christians to cast spells on themselves! etc.36 minutes / 3.5 megabytes.