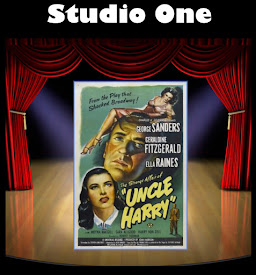 Studio One. March 2, 1948. CBS net. "Uncle Harry". Sustaining. An excellent Victorian murder-melodrama, with a good ending. Michael Redgrave, Judith Evelyn, Gertrude Warner, Everett Sloane, Brenda Forbes. One of the most successful plays ever written by a Welsh author was Thomas Job's Uncle Harry. Regarded as the best drama of the season in America in 1942 it ran on Broadway for 12 months. Karl Malden played the lead in many of its 430 performances. The play itself concerns Harry and his two sisters. When Harry falls in love one of his sisters becomes horribly possessive and tries to break up the romance. The tale ends in death with a poisoning. It's a dark, claustrophobic drama with more than a hint of incest.