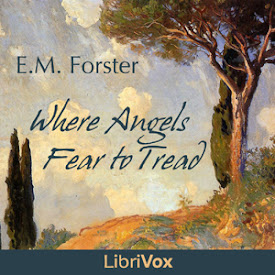 Where Angels Fear to Tread

On a journey to Tuscany with her young friend and traveling companion Caroline Abbott, widowed Lilia Herriton falls in love with both Italy and a handsome Italian much younger than herself, and decides to stay. Furious, her dead husband's family send Lilia's brother-in-law to Italy to prevent a misalliance, but he arrives too late. Lilia marries the Italian and in due course becomes pregnant again. When she dies giving birth to her child, the Herritons consider it both their right and their duty to travel to Monteriano to obtain custody of the infant so that he can be raised as an Englishman. (Summary from Wikipedia) (4 hr 43 min)

Recently widowed Lilia leaves her overbearing in-laws in England, to tour Italy, which her brother in law assures her is enchanting. Completely entranced by the Italian lifestyle and culture, Lilia falls for a handsome but penniless younger man and impulsively marries him. Her scandalized mother-in-law immediately disowns her for bringing shame upon the family. A year later, Lilia is dead in childbirth, and while her English in-laws have no genuine interest in her infant son, a chance remark from a family friend impels them to seek custody in order to save him from a "savage" upbringing. Where Angels Fear to Tread is no love story. Forster began his writing career with this book of contrasts, introducing themes that would occupy him for the rest of his life. The sterility and pretensions of upper middle class Edwardian society are scrutinized against the passionate (and heavily stereotyped) lifestyle of the Italians, and come up short. What matters more, duty or happiness, self control or self expression, intention or outcome? This novel is described as social satire, and it has its amusing, farcical elements, but the subject matter is serious and the ending, tragic.

Slightly amateurishly read but a good story for old fashioned Italophiles with a taste for the vaguely ridiculous.

the narration was very good