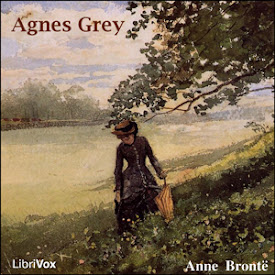 The novel tells the story of Agnes Grey, the daughter of a minister, whose family comes to financial ruin. Desperate to earn the money to care for herself, she takes one of the few jobs allowed to respectable women in the early Victorian era – the role of governess to the children of the wealthy. In working with two different families (the Bloomfields and the Murrays), she comes to learn about the troubles that face a young woman who must try to rein in unruly, spoiled children for a living, and about the ability of wealth and status to destroy social values. After her father's death, Agnes opens a small school with her mother and finds happiness with a man who loves her for herself. They have three children at the end of the novel, Edward, Agnes and Mary (Wikipedia) (6 hr 41 min)

Chapter 02 - A Few Lessons in the Art of Instruction

Less dramatic than her own Tenant of Wildfell Hall, and less read than her more famous sisters' works, Agnes Grey is a straightforward, semi-fictional chronicle of the experiences of a governess in 19th century England. Agnes is the younger daughter of a mother whose wealthy family disowned her for loving marrying an impoverished clergyman. To help ameliorate her family's dire financial condition , Agnes chooses to seek a situation as companion and teacher to the children of wealthier people. Though she understands well how to raise responsible children, their selfish parents undermine her attempts by neglecting yet overindulging them. Treated as underling by her employers, ignored by their servants, and plague by her students, poor Agnes must struggle alone under impossible working conditions, determined to help her own family regardless of the cost to herself. Her story comes to a happy conclusion, but Bronte was not interested in writing about "felicitous" times. Her intention with this book, to reveal some of the injustices of the class system, is achieved by example rather than preaching. Reminiscent of some of Jane Austen's stories, particularly Persuasion, Agnes Grey is a gracefully narrated, unpretentious story told with impressive effect.

I found having several different readers quite distracting and probably will steer clear of books read by “various” in the future. The story was fine. I enjoyed it but have certainly read much better as well.

Beautifully woven ideas through characters. How people are the same today as all those years ago. Astonishing to be able to identify exactly those personalities in the 21st century. Great novel.

I really enjoyed this. Beautifully written. Most of the readers were easy to listen to and clear. Overall worth the few hours for sure.

The first few chapters were quite adequately read, but I couldn’t endure past the 10th chapter. I strongly suggest one find a different recording.

A good book but the various readers made it hard for me to follow and stay interested.

whoever read chapter 13. made me dizzy. she didn't even pause for a breath

Good plot, a bit dull at times. Main character was nice and relatable.