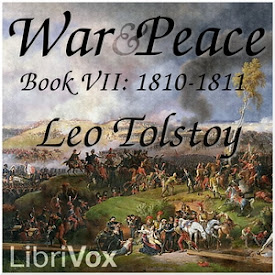 War and Peace offered a new kind of fiction, with a great many characters caught up in a plot that covered nothing less than the grand subjects indicated by the title, combined with the equally large topics of youth, age and marriage. While today it is considered a novel, it broke so many novelistic conventions of its day that many critics of Tolstoy's time did not consider it as such. Tolstoy himself considered Anna Karenina (1878) to be his first attempt at a novel in the European sense. (Summary by Wikipedia) (2 hr 37 min)

One of the great tomes

I'm only up to book 7 and ten more to go! I think this is much longer than Victor Hugo's Les Miserables which I love also. Special thanks to the loveable, charming, mature and wonderful foreign accented voice of EVA. Also love the voice of Elena the Quiet. I was dissapointed she has not read more sections but no doubt her life must be full, busy and so I thank her for the few sections she has left to us. And thanks to all readers, librivox and IA for giving to all, especially those of us who are disabled and the poor, free audiobooks. I am forever grateful. dahszil male usa