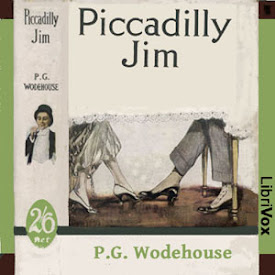 A young red-head plots to kidnap her irritating cousin with the help of a former boxer, her uncle, and a rogue who has his eye on her. Things don't work out exactly as planned, as criminals, detectives and cases of mistaken identity all get in the way. (Summary by Carrie Bradfield) (7 hr 44 min)

Painful Scene in a Cafe

Jimmy Decides to be Himself

The Voice From the Past

Between Father and Son

Stirring Times for the Petts

Sensational Turning of a Worm

Piccadilly Jim is a novel by P. G. Wodehouse, firse published in the United States on 24 February 1917 byDodd, Mead and Company, New York, and in the United Kingdom in May 1918 by Herbert Jenkins, London.[1] The story had previously appeared in the US in theSaturday Evening Post between 16 September and 11 November 1916. The novel features Ogden Ford and his mother Nesta (both previously encountered in The Little Nugget (1913)). Nesta has remarried, to the hen-pecked, baseball-loving millionaire Mr. Peter Pett, and Ogden remains spoilt and obnoxious. The story takes its title from the charismatic character of Jimmy Crocker, Nesta's nephew and a reforming playboy. 'Jim' is called upon to assist in the kidnapping of Ogden, amongst much confusion involving imposters, crooks, detectives, butlers, aunts etc. - all in the name of romance of course. Film adaptationsEdit See also: Piccadilly Jim (1936 film) Piccadilly Jim has been adapted as a film three times, in 1919, 1936 and 2004, with Crocker played by...

MRS. MARPLE WOULD NOT BE IMPRESSED

PGW once again gives us a highly enjoyable farce. Two henpecked husbands revolt; a ne'er-do-well reforms; Gentleman Jim makes an encore appearance; and a few other fun happenings. The reader maintains a proper tongue-in-cheek tone. What else can one ask for?

Listened to it again, and it was great, cheered me right up. Thanks! Original review - July 27, 2010 I enjoy PG Wodehouse's books immensely. His writings are almost always laugh out loud funny. This story is no exception. Jimmy has led the life of a ne'er-do-well, getting into one tangle after another while living in England. Then he meets the girl of his dreams and decides to turn over a new leaf. The complication? She hates him because of his history of great 'worminess' (you'll understand when you hear the story). Complicating things is Mr. Crocker, Jimmy's father, who leaves his wife in England and decides to masquerade as a butler in the US because he love baseball and misses it so much. The story is funny, and the readers are excellent. All in all, it was a great read and kept me listening until the story was done. Enjoy!

A quintessential Wodehouse tale. Imagine my delight upon hearing the name Ogden Ford once again; I had to rewind the story and start all over again with even more rapt attention upon hearing that Ogden, the star of The Little Nugget, was back in another zany story. Hip hip hurrah for Ogden :0 The rest of the characters are all wonderfully Wodehouse-ian creations, as is the multi-layered, convoluted plot. A delight from start to finish!

I love the light-hearted novels that PG Wodehouse turned out in abundance, and Piccadilly Jim is no exception. The identity tangles do require close attention as you follow the plot, but it's all worth it in the end! Enjoy!

A book with the unexpected, unlikely turns of events I have come to expect from P.G. Wodehouse. Laughs all the way through. And I am so glad he is finally doing something about over-fed, over-indulged Ogden.

It's easy to forget that Wodehouse wrote anything except the Jeeves series, since they get all the attention. But his earlier, now obscure works are also a lot of fun.

Excellent and very entertaining story. The readers did a fine job, with the exception of the second reader's attempt at female voices. Greatly appreciated the volunteers contributions. Thanks to all.