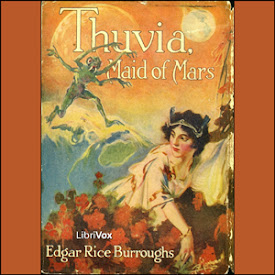 In this novel the focus shifts from John Carter, Warlord of Mars, and Dejah Thoris of Helium, protagonists of the first three books in the series, to their son, Carthoris, prince of Helium, and Thuvia, princess of Ptarth. Helium and Ptarth are both prominent Barsoomian city state/empires, and both Carthoris and Thuvia were secondary characters in the previous two books. (Summary by Wikipedia)

The Hall of Doom

The Battle in the Plain

It's a good book, but it sounds like an afterthought rather than a direct part of the series. The narrator was fine for a while and then there were a lot of mouth noises and wheezing nasal passages that were a little irritating. Overall the story was good.

Let me start by saying that if you've enjoyed any of the previous "John Carter" Mars books then you'll enjoy this one just as much. It's pulp sci fi with a thrilling constant action edge that keeps you listening. Yes you might see the end coming but that doesn't make the trip any less fun. The story follows the son of John Carter as he finds, loses and then hunts down love! As with all of the other novels much that is new to the reader is introduced as the world is explored. In the previous novels there was always some new factor, new races, new location to be discovered and this story follows that pattern. Swords are drawn just as redily as rifles and everyone has a grudge to settle so the action just does not stop. As a superb bonus the reader of this audio book is excellent, and although he doesn't put on voices he does a tremendous and excellent job of reading this novel, a professional job in fact. If you want to read more of my reviews for free audio visit http://freeaudioreview.blogspot.com/

though written in the third person, it's quite good. it did have a few looks ends that didn't get wrapped up. but over all a good listen Reader did a good job. sometimes his voices were comical in a serious situation. but he did a good job

This novel is a remarkable work where the adventures of the heros and heroines of Barsoom are intermingled with the philosophical discourse. This all forms great sustenance for the heart and the intellect.

This was not very good. The readers of the story did read well.

enjoyable. just wondering why the voice switch from 1st person to 3rd.

great story... abrupt ending that failed to tie off all the knots