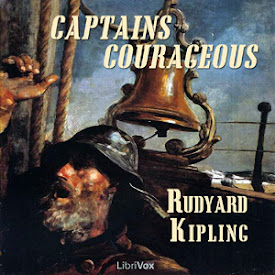 Real men don't take guff from snotty kids. Neither does Disko Troop, skipper of the "We're Here", a fishing schooner out of Gloucester, Massachusetts, when his crew fishes Harvey Cheyne out of the Atlantic. There's no place on the Grand Banks for bystanders, so Harvey is press-ganged into service as a replacement for a man lost overboard and drowned. Harvey is heir to a vast fortune, but his rescuers believe none of what he tells them of his background. Disko won't take the boat to port until it is full of fish, so Harvey must settle in for a season at sea. Hard, dangerous work and performing it alongside a grab-bag of characters in close quarters is a life-changing experience.

And when Harvey at last is reunited with his parents, who have thought him dead for months, he must face the hard decisions of how he will allow his experience to change his life. (Summary Mark F. Smith) (5 hr 56 min)

I've listened to several books and stories now by Mark Smith- I really enjoy his reading style and his voices. As for the book, it is a simple yarn of early American Fisherman and the redemption of a spoiled brat into a useful young man. I love the nautical terms and the glimpse into the daily life of these Cod Fishermen... contrary to some criticisms of the book- I found the story and characters developed enough and the story to be humorous at points as well...entertaining and uplifting all in all- add it to your list

little rich brat straighten out into a man

this reader always does a fantastic job. an amazing voice and clear recording. the story is about a spoiled little rich boy who get some sense knocked into him and grows into a fine young man his father can finally be proud of. a great story for young or old, men or women.

I only ever think of the British author Rudyard Kipling in relation to The Jungle Book (set in Asia and which I only know through the Disney musical version), so I was ever so surprised that Kipling wrote this wonderful yarn with minutely detailed information about a Gloucester schooner cod fishing on the Grand Banks. (Please read the Wikipedia entry on the Captains Courageous book for excellent background information on where, why, and how Kipling was inspired to write this book.) Fantastically read, as always, by Mark Smith, one of my most favorite Librivox volunteer readers.

Great Story and a great reader

This is a fantastic story. I was not sure what to expect but I am very glad that I listened to this. If you think that because you may have seen the film so you don't need to listen to this book - then think again - you are missing out if you do not listen to this story. Mark Smith is an excellent reader and an asset to this project. I have listened to many books read by Mark and every time I am impressed by the high standard that he delivers.

it's no Jungle Book, but it's still a great story

There was an abundance of technical shipping terms and expressions that my brain ignored because it couldn't process what was being said, but Mark Smith's reading and expression conveyed meaning and context and kept me afloat. (Ahoy, boating humor, me hearties!) I especially liked his rendering of the voice and mannerisms of Captain Disko.

Thanks much to Mark F. Smith for a very nice reading of Captains Courageous by Rudyard Kipling. My favorite of his many voices was Disko Troop. I enjoyed the story too; lots of interesting characters. (The long funeral scene didn't quite mesh with the adventure story, but of course abridged works are a different issue.)

Well read. Twenty first century dwellers need to know Kipling tosses around the N word some in this book, almost as if he were a British Empire Jingoist. The story follows a bratty teenager who grows up by an involuntary stay in the hard life of fishing. He, his family, and the fishermen all change from the encounter.

Simply loved the seafaring story; a coming of age tale replete with salty sea dogs and shanties. The narrator is such a professional and I appreciated the different voices he created. Kipling's descriptive ability created such a vivid picture of the tough life out at sea in those days. Bravo!