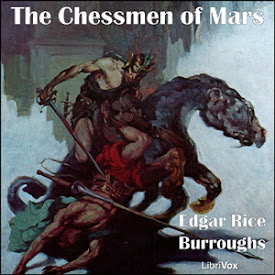 The Chessmen of Mars

The Chessmen of Mars is a science fiction novel by the mental sword and physical pen wielding author Edgar Rice Burroughs. It the fifth installment of his Barsoom series. The Chessmen of Mars is a tale of wonder and excellence that follows John Carter and Dejah Thoris, along with their daughter Tara, princess of Helium, as she is sought after by Gahan, Jed of Gathol. Adventure and perile ensue as the story unfolds.

Note: The Prelude and Chapter 1 are read by two different readers. Variety is the spice of life.

16 - Another Change of Name

20 - The Charge of Cowardice

22 - At the Moment of Marriage

Again, a great story, well read. The author is so clear and descriptive in his stories that they unfold like a movie!

The Barsoom series of books are a steam punk type of story where heros leap around waving swords at the bad guys even when they can all lay their hands on firearms. This story follows a familar Barsoom pattern of a journey across unknown parts of Mars and encounters with new races of "men". A woman in trouble needs rescuing and a manly sword waving hero is close at hand. When you listen to these Barsoom stories there is never any doubt about a happy ending being around the corner but that's not the best part of the stories. It's the adventure and action that make the story worth listening to. In common with all of the other Barsoom stories I've listened to, this is a jolly good listen! In this story the woman in trouble is John Carter's daughter who becomes lost and needs a heroic red man to come to her rescue. Which of course he does. We find at least two new martian races to complicate things and the usual collection of predator type animals to threaten everyone. If you've enjoyed any of the other Barsoom stories and liked them, you can move onto this story with confidence. The reading in this novel is pretty good, but there is a rather odd thing here. There are two versions of the first couple of chapters by different readers. I have no explanation for why that may be, it's odd. Read more of my reviews of Free Audio Books over at http://FreeAudioReview.BlogSpot.com

This is probably the best of his work Tarzan of the Apes John Carter of Mars Carson Napier of venus Heroes who overcome vast odds. In this tale the odds are really odd. It is too bad that the audio can't include the game of Jetan instructions. Kaor

good book but the first reader sounds drunk but suffer through it because he is only on the first and third file. next reader kicks ass though!

The first few chapters are double ups..... just skip the ones with poor audio quality and poor narration and all is good from there on good story..... Thanks.

this story is 100 years old so it's predictability is forgiven. Though the worst of the series thus far, it's still a great listen and I completely enjoyed it.

I really enjoyed this book. It was really well read and was captivating throughout. It is pity i can not find the rest of the series on here.