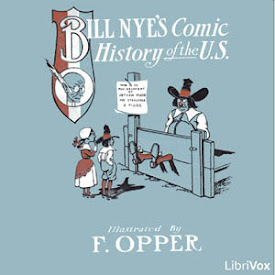 Comic History of the United States

This text takes the reader on a comical journey from the time of the first European settlement through the Civil War. The author's caustic wit is evident throughout the book in his numerous sarcastic and humorous remarks. The reader will enjoy a "different" type of history book based on facts, yet caustically embellished for entertainment purposes. (Summary by Allyson Hester)

Some of the writing was clever, and the reader was nice and clear. However, this one was not quite my cup of tea. If you like the older humor of the 1800's, it may be worth your while.

good content, not so good reading having a few accidents here and there

This book appears to be intended as explanation for drawings which are not available in the audio only version, and that makes it hard to follow. It's a shame, because it sounds like it might be clever and funny with the illustrations. The volunteer reader's voice is charming, clear, and engaging, with a slight southern accent. Even occasional mispronunciations seem almost as if they could have been intentional, though it's hard to tell without the illustrations.

I love Bill Nye, but the tone of the reader seemed to be directed toward a more juvenile audience. I couldn't get past the third chapter even after several attempts. Though the content was amusing, the mispronunciations and disregard for punctuation made it difficult to follow Mr. Nye's rather detailed & descriptive narratives. I'd be quite interested in a Version 2.

At first I had my doubts about this book because I was not sure of the nature of the comedy used. The author does not insult, demean, nor degrade anyone. It is absolutely hilarious. At times I could detect that the reader was getting tickled at some of the imagery.

not add funny as I had hoped, but quite enjoyable nonetheless. if you know your history it will be much more humorous to you. The typical mispronounced words, but easily ignored in favor of the otherwise good reading.

Reader doesn’t know the difference between “cavalry” (the military term) and “Calvary” (a sacred location in Jerusalem). It is continuously mispronounced in the closing chapters.

It was fun to listen to and the content was education and refreshing.