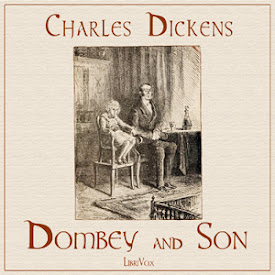 Charles Dickens the author of Dombey and Son, originally wrote the book in installments which were published from October 1846 to April 1848 under the title Dealings with the Firm of Dombey and Son: Wholesale, Retail and for Exportation.

The story centers around Paul Dombey, the stern owner of the Firm. He is totally immersed in having his newly born son continue the business, and entirely neglects his daughter Florence. Tragedy occurs, and Florence’s plight worsens. As the years go by, Mr. Dombey sees to it that the man she loves, his employee, is sent far away. Mr Dombey remarries, but his marriage is eventually destroyed, his fortune gone, he becomes destitute. Finally he accepts help from his daughter, and life changes for him. Many wonderful characters interweave the tale, as in all Dickens literary masterpieces. (Summary by Mil Nicholson) (40 hr 21 min)

Chapter 02: In which Timely Provision is made for an Emergency that will someti…

Chapter 03: In which Mr Dombey, as a Man and a Father, is seen at the Head of t…

Chapter 04: In which some more First Appearances are made on the Stage of these…

Chapter 07: A Bird's-eye Glimpse of Miss Tox's Dwelling-place; also of the stat…

Chapter 09: In which the Wooden Midshipman gets into Trouble

Chapter 10: Containing the Sequel of the Midshipman's Disaster

Chapter 14: Paul grows more and more Old-fashioned. and goes Home for the holid…

Chapter 15: Amazing Artfulness of Captain Cuttle, and a new Pursuit for Walter …

Chapter 16: What the Waves were always saying

Chapter 17: Captain Cuttle does a little Business for the Young People

Chapter 22: A Trifle of Management by Mr Carker the Manager

Chapter 24: The Study of a Loving Heart

Chapter 26: Shadows of the Past and Future

Chapter 29: The Opening of the Eyes of Mrs Chick

Chapter 30: The Interval before the Marriage

Chapter 34: Another Mother and Daughter

Chapter 37: More Warnings than One

Chapter 41: New Voices in the Waves

Chapter 43: The Watches of the Night

Chapter 48: The Flight of Florence

Chapter 49: The Midshipman makes a Discovery

Chapter 51: Mr Dombey and the World

Chapter 58: After a lapse

I never read Dickens as a child because I thought his writing was too drawn out and even boring. Now that I'm 'old' I really do appreciate the intricate detail, the subtle and sometimes wry sense of wit and humor that some of his characters display. I liked this story very much. Although sometimes harsh and sever, it also had quite a bit of sweetness and sunshine. Also, the reader Mil Nicholson did a SPECTACULAR job bringing each character to life in her inimitable fashion. I really appreciate and applaud the amount of effort she applies to her readings and where there are muliple readings of a title, I always check to see if she is a reader and pick hers!

Dickens takes his readers on a grand and deluxe tour of the highest heights of self absorption and arrogance, cruel indifference, and a man thinking himself God, to, I will simply say, other extremes. In my own personal case the result was the evocation of fathoms-deep emotions and reflection of situations and memories both bitter and sweet. Mil Nicholsen's narration was, as always, superb. And if you are willing to take the chance of being pulled into deep consideration of some hard issues, there is no other Charles Dickens novel I would recommend more highly — so far — than Dombey and Son.

Gem of a book read masterfully

Absolutely fantastic book, I wish I had listened to it sooner! For a good while I hesitated to listen to this book, simply because I wasn’t sure how much I would love the story, in comparison to other books dickens has written. How wrong I was. It is an absolutely wonderful story, that runs you through the gamut of human emotions, as Dickens so masterfully does. I stumbled across this particular recording, simply because I wanted to listen to more books read by Mil Nicholson. My absolute most favorite reader on LibriVox. Thank you for taking the time to read these books aloud for us!

Excellent story by a superb reader!

once again, Mil Nicholson brings Dickens to life in this story of greed, power, love and redemption. I am sad to leave these characters behind. As a blind person, I have really appreciated rediscoering Dickens. I had not read many of his works as a sighted person, but Mil brings the characters to life and makes each story vivid with the times. Guess I'll have to find another Dickens book read by Mil Nicholson

There is nothing like listening to an audio book when in bed or doing the dishes. This audiobook feels almost like a habit. After having listened to this marvulous book, I must say that from the second I started listening, the mystery in the start, the development of the story, etc. all parts are perfectly made

I wish I could rate this book higher than five stars!

Thank you to Charles Dickens and Mil Nicholson for this marvelous work of art! I wish I could give them each 10 stars! I've read a LOT of Dickens, and this is certainly my favorite book by far! I wished that it would go on and on, and even though it's already a long book, I would've loved to have more! The metaphoric use of the ocean throughout was beautiful, and twice I actually had to take a short break from the story and read a lighthearted young adult novel in the interim because the emotional depth of Dombey and Son is so great (but without being morbid or overly sentimental) that I needed to step away and grieve along with the characters for their misfortunes. How many books are that realistically emotional and true to life? There is a little piece of my heart that will always belong to Dombey and Son! Mil Nicholson's narration is such a treat that I'm going to find every book she's recorded and listen to it! She must be a professional actress, narrator, or voiceover artist because the narration of this book sounds professionally produced! (Frankly, her narration is light years beyond what I've heard in MANY audiobooks for which I've paid!) She expertly manages unique voices for dozens of quirky characters so masterfully that she brings them to life! Ms. Nicholson is a true gem, and I applaud her talent and am grateful for the time and energy she devotes to reading for LibriVox! In sum, LISTEN TO THIS BOOK!

Despite my having read or listened to a lot of Dickens, somehow I always missed this one. It’s a huge book, over 40 hours long as audio, but what a great investment it was for me. I don’t think I’ll ever forget the impact of the characters in the story, or the powerful messages the story brings. Mil Nicholson is surely a wonderful narrator, and she brought those characters to life amazingly. As another reviewer mentioned, I feel sad to leave them behind. You get such a connection to them through the course of the book. So many good hearted people. Thanks Mil, I feel I owe you a great debt for this huge investment of yourself and your talents.

Although I love reading Dickens, there is an advantage to hearing his novels read by such an excellent actress as Mil Nicholson. On reading Dickens, I have found some of the extended monologues to be tedious. Not being british, I am not well aquainted with British dialects. Mil Nicholson breaths life into these monologues making them thoroughly enjoyable accentuating the idiosyncrasies of the various dialects. It awakes an appetite to replay the monologues a number of times. Nothing needs to be said about the greatness of the novel "Dombey and Son." I do highly recommend this rendition of it. It carried me through a long bout of the flu and was a great consolation. Thank you, Mil Nicholson!