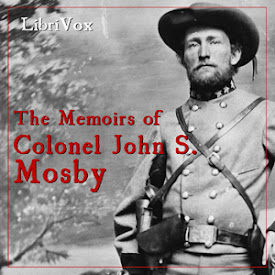 This is not a work of fiction! These are the actual memoirs of a legendary leader of partisans who bedeviled the Union army for years, almost within sight of the capitol. With only a few local men under command, John Singleton Mosby's ability to strike fast and then melt away before an effective pursuit could be organized kept the Yankee forces awake and often snarled in knots. With daring feats like capturing a Yankee general out of his bed within his defended headquarters, Mosby made his name a synonym for guerrilla warfare. Even today you can purchase in Middleburg, Virginia, a map showing "Mosby's Confederacy."

The mettle of the man may be judged by the enemies he kept. Said General Joseph Hooker, "I may here state that while at Fairfax Court House my cavalry was reinforced by that of Major-General Stahel. The latter numbered 6,100 sabres. . . . The force opposed to them was Mosby's guerrillas, numbering about 200, and, if the reports of the newspapers were to be believed, this whole party was killed two or three times during the winter. From the time I took command of the army of the Potomac, there was no evidence that any force of the enemy, other than the above-named, was within 100 miles of Washington City; and yet the planks on the chain bridge were taken up at night the greater part of the winter and spring."

Mosby outraged many of his Southern admirers after the war when he publicly endorsed General U.S. Grant for President. After an appointment as U.S. Consul to Hong Kong and a 16-year career with the Southern Pacific Railroad, he came to Washington as an assistant attorney in the Department of Justice. Loyal to the end to his commander, J.E.B. Stuart, Mosby also answered accusations that Stuart's grandstanding cost Lee the battle of Gettysburg. (9 hr 34 min)

A Private in the Cavalry

The Strategy of Manassas

The Campaign Against Pope

First Exploits As a Partisan

The Raid on Fairfax

Stuart and the Gettysburg Campaign, Part 1

Stuart and the Gettysburg Campaign, Part 2

The Year After Gettysburg

The Campaign Against Sheridan

Last Days in the Valley

My Recollections of General Lee

My Recollections of General Grant

Fascinating life that Colonel Mosby lived. He was a remarkable man, southern patriot and certainly, in my opinion, the most intriguing man of the war

Mosby was some soldier. Amazing book. Make sure you listen to the last few chapters taking note of Mosby's relationship after the war with Grant. Attitudes then were very different than attitudes today. Grant and Lincoln were very anxious to reconcile with the South, including tbe ex-Confederates like Mosby. Today? Their statues are being torn down! Grant and Lincoln would be appalled at what is happening today. Great book. Well read. Thanks

I have come to love Mark Smith and I really enjoyed hearing of Mosby's life and service during the WBTS.

lots of history. well read. not a lot of high drama action.

another great read by Mark Smith