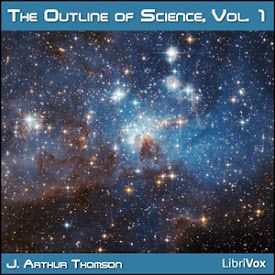 The Outline of Science, Vol 1 (Solo)

In The Outline of Science, Thomson gives us a window into scientific thinking as it stood in 1922 on the big, the little, and the biological. With straightforward language intended for a general audience, this book covers astronomy from the Solar System to the Milky Way, the submicroscopic makeup of matter from protons and electrons, and the evolution of simple living beings into the varied fauna of the world today. Thomson cites many examples that would have been familiar to his readers of the day and notes where scientific understanding leaves off and conjecture begins. He clearly shows how the accumulation of observation and experiment stacked up to form the body of knowledge reported in the book. For even the scientifically well-versed, there will be interesting nuggets, for investigation into how the world came to be as it was, was both wide and deep.

To a modern listener, what was not known may be as interesting as what was. With the 100-inch Mt. Wilson reflector the largest telescope in the world, the existence of galaxies outside the Milky Way was suspected but not confirmed. Neutrons, soon to become important in the field of nuclear energy and atomic bombs, were as yet unguessed-at, yet the prospect of liberating the immense energy of the atom was already a keen interest. Although the famous Michaelson-Morley experiment had already been seen as disproof of an all-pervading "ether" which facilitated the flow of energy across empty space, scientists still retained ether as a place-holder for properties they could measure but not explain - an approach very similar to the "dark matter" of modern cosmology.

Regardless of your personal sentiments on Darwin's theory of evolution, Thomson provides well-chosen examples that illustrate why this theory arose. He examines not only the fossil record but the evidences present in modern living beings that the process of evolution is by no means finished, but ongoing.

Even at that time, Thomson worried over the future of energy sources. He contemplated the exhaustion of the coal fields and indeed, the eventual exhaustion of all usable energy in the universe, foreshadowing our concept of entropy.

This book has been consistently among the "Top 100 E-Books" published by Project Gutenberg.
Summary by Mark F. Smith. (10 hr 0 min)

The Romance of the Heavens, Pt 1

The Romance of the Heavens, Pt 2

The Story of Evolution, Pt 1

The Story of Evolution, Pt 2

The Story of Evolution, Pt 3

The Struggle for Existence

Foundations of the Universe, Pt 1

Foundations of the Universe, Pt 2

Foundations of the Universe, Pt 3

a good way to get educated about science .At school my teachers did not really want to teach me because I am Dyslexic .I have leant a lot from this book and you can too.

easy to listen to much of the information is still relative

I wish he did the whole series T_T