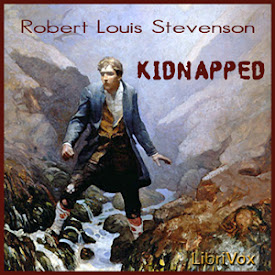 David Balfour, a lad of seventeen and newly orphaned, is directed to go and live with his rich uncle, the master of the estate of Shaws in the lowlands of Scotland near Edinburgh. His uncle, Ebenezer (as close a miser as Dickens' Ebenezer Scrooge), is shocked to suddenly have his young relative descend on him and tries to rid himself of David with an arranged accident. Failing that, he pays the captain of a brig to kidnap David and sell him into slavery in Carolina. A collision in the fog brings onboard the brig a survivor, Alan Breck Stewart, who is carrying a dangerous amount of gold on his person. David warns him of a plan by the brig's captain and crew to overpower him and seize the money, and then finds himself fighting alongside Alan in a battle royale. By good fortune, Alan is handy with a sword and they have access to the firearms locker, and the pair so completely defeat the crew that barely enough hands remain to sail her. Limping to port, she is holed by rocks, and David finds himself a castaway. Being in Alan's presence continues to be a chancey business. David is talking to Colin Roy Campbell, the King's Factor who has been oppressing Alan's people, when the man is shot to death, and David is chased as an accomplice. The two "take to the heather" and barely survive near brushes with redcoats as they thread through the Trossachs and other highland ranges of Scotland. Only after an arduous weeks-long trek through territory where they are actively hunted do they emerge in the more settled districts around the river Forth, only to find guards upon the bridge. With no money remaining, they must somehow cross to Queensferry, find Ebenezer's lawyer, and lay claim to David's inheritance in order to send Alan safely on to France. (summary by Mark F. Smith) (8 hr 16 min)

I Journey to the House of Shaws

I Come to My Journey’s End

I Make Acquaintance of My Uncle

I Run a Great Danger in the House of Shaws

I Go to the Queen’s Ferry

What Befell at the Queen’s Ferry

I Go to Sea in the Brig

The Man With the Belt of Gold

Siege of the Roundhouse

The Captain Knuckles Under

I Hear of the Red Fox

The Loss of the Brig

The Lad With the Silver Button: Through the Isle of Mull

The Lad With the Silver Button: Across Morven

The Death of the Red Fox

Talk With Alan in the Wood of Lettermore

The House of Fear

The Flight in the Heather: The Rocks

End of the Flight: We Pass the Forth

I Come to Mr. Rankeillor

I Go in Quest of my Inheritance

I Come Into My Kingdom

This audio book was beautifully done! Really very well read, practically as good as could be done by any of the good actors and audio books narrators. Thank you very much, Mr. Smith! I really got so much pleasure from listening this book despite knowing the content. If Mr. Smith would consider to read Catriona as well, I would be the first to download it! In fact, I would buy a CD with both books if it were available. For those who didn't read the book itself - you will enjoy it, you can tell that this is a sample of very good literature, both in language and content and plot.

I can't imagine a better reading of this compelling tale. And RLS deserves more recognition for his realistic portrayals of relationships and personalities, as well as detail he brings to landscapes.

wonderful job by the reader! a great adventure story. kidnap, on the high seas, sword fight, shipwrecked, hiding from solders. a classic adventure tale. and wonderful to hear the friendship that came about.

Great rendition of a classic. Thanks to M. Smith and Librivox for bringing this book to life.

I much enjoyed the variety of voices and wonderful accents Mr. Smith employed for each of the characters in this wonderful piece of literature. It’s a great book on its own, but his reading breathes life into the words on the page. Thank you Mr. Smith for putting such quality and effort into this book recording and LibriVox for hosting such efforts in the public domain. I will be looking for both more Mr. Stevenson the author and Mr. Smith the reader.

Despite his disclaimer at the beginning, this reader does creditable Scottish accents, helping to bring the characters in this classic tale to life. It's a rip-snorting good adventure tale that paints vivid pictures of diverse sections of Scotland, from sea to mountains and forests to towns. I thoroughly enjoyed the complex tale told in "Kidnapped" and will be seeking out other tales by Robert Louis Stevenson. I shall also seek out other stories read by this volunteer for Librivox.

COULD NOT BE BETTER

RLS does not receive enough credit for the depth of his characters. Mark Smith has us spoiled with his always clear and lucid narrations. This narration was even better than usual as he used enough of the highland brogue to be interesting, but he does not go so far as to ,ake it impossible to understand as so so many of the readers of the Scott novels. Thank you.